If you haven’t worked out at all, can you climb a massive staircase at a dead run without passing out? If you can, you’re tougher than I am. Either that, or you’re not asthmatic. Generally speaking, it’s not a good idea to jump into difficult physical circumstances if you haven’t prepared yourself for them. That’s why people train for marathons. That’s why those crazies who climb Mt. Everest have to set up base camps along the way to acclimate to the altitude.

The photo I picked for today isn’t a very good representation of the temples at the ruins of Tikal in Guatemala. To really grasp their enormity, you kind of have to be there. But I will be the first to tell you that the steps leading up the front of all of them are killer. Most of the steps you can’t actually climb just because the temples themselves are so old, but the rickety old wooden stairs that have been built on the sides aren’t much safer. They’re certainly no less steep.

We can rejoice, too, when we run into problems and trials, for we know that they help us develop endurance.

Giving up means that we’ll never learn anything. And every trial or difficulty in our lives is there to teach us something. Pressing forward is a challenge always, but at the end of the day you will have learned something about yourself and something about God too.

What’s really amazing, though, is that once you get past a difficult spot in your journey of life, the next time a similar problem comes up it won’t faze you. Because you already saw what God did the first time you went through it. So you aren’t afraid of taking the challenge head on.

Like training for a marathon. Like acclimating to a high altitude. When you press forward through difficult circumstances, your faith will increase in strength, and the next time your faith is challenged, you won’t falter. But if you give up in the middle of the fight, you’ll never learn the lesson you were supposed to learn. And you’ll keep experiencing the same problems over and over again until you do.

My first real job out of college was at a library. I loved my job, and I loved the people I worked with. But it really didn’t pay very much. I did okay for a year, but by the second year, my finances were starting to get a little thin because cost of living had gone up and my hourly rate had stayed the same. And by the third year, well let’s just say I wasn’t sure where my groceries were going to come from. I had a couple of options. I could stop giving to my church. I could stop providing for those less fortunate than me. But I felt like God was really calling me to do those things. So I didn’t stop.

Looking back on it now, I’m not really sure how the numbers make sense. Because I shouldn’t have been able to afford to live. But God provided for me in ways that I don’t know how to explain during that time in my life. And He did it so many times that there is no doubt in my mind that it was Him. So now? Well, in the circumstances that I’ve run into in the last two years at my new job when I run across an expense that I know God has put there, I don’t hesitate. Because I know He’s going to take care of me. He’s done it before.

Problems and trials are difficult. But do we really learn anything when life is going our way? Can we really understand something God is trying to teach us when we’re comfortable? I don’t think so. People aren’t wired that way. So at times, we need to be shaken up. We need to experience some difficult circumstances so that we can learn what God wants us to learn, so we can live the way He wants us to live, so we can handle what’s coming.

Climbing the steps up the temples of Tikal is difficult. It’s draining. It’s exhausting. It’s rough even if you don’t have asthma. And those steps are all you can see for a long time. But  it’s worth it because of the view at the top. Trials and problems in life are no different. 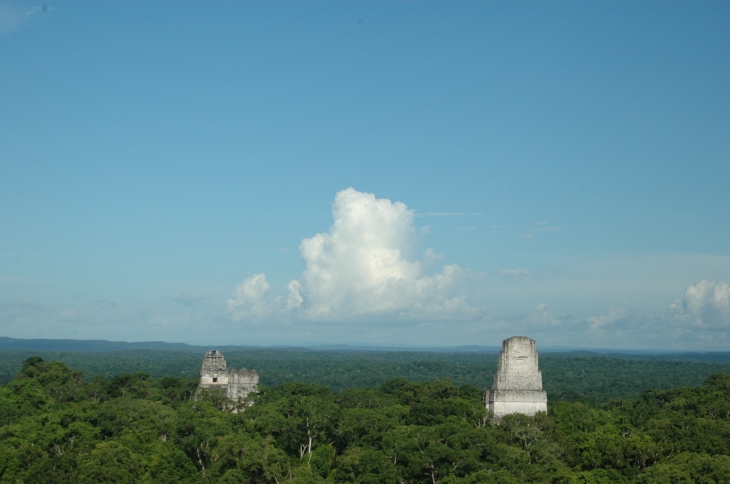