I have noticed an influx of those “Keep Calm!” t-shirts. I’m not sure if anyone else has noticed them or not, but they’re pretty random and kind of funny. “Keep Calm and Eat a Cupcake” or “Keep Calm and Don’t Blink” and so on and so forth. I get them mixed up with the “Don’t Panic and Carry a Towel” t-shirts, which references Hitchhiker’s Guide to the Galaxy by Douglas Adams.

Maybe that’s a silly example, but I have also noticed more and more materials out there that are all about trying to stay calm in rough situations. Self-help books and 12-step programs and meditation guides–lots of people smarter than me have all been working on ways to help us stay calm through the dark parts of life.

But do any of those methods work? In Hitchhiker’s Guide to the Galaxy, the one item you needed to help you out of any situation was a towel.

So is there an item we can carry around with us that will help get us out of scrapes and help us to not panic? 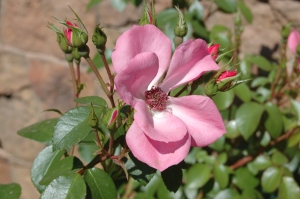 So be strong and courageous! Do not be afraid and do not panic before them. For the Lord your God will personally go ahead of you. He will neither fail you nor abandon you.

Well … maybe it’s not an item. But it’s something to remember. This was actually Moses speaking to the Children of Israel just before he handed over leadership to Joshua. He told Joshua something similar, but this message was for the people who would be following Joshua.

Personally, I’m not prone to panic. It’s difficult for me to get to that place. I generally stay fairly calm in just about any circumstance … unless we’re talking about getting up in front of people or talking to someone I don’t know. Then, panic becomes very natural for me. But when you get right down to it, panic doesn’t solve anything. Actually, panic creates more problems than it solves. And it doesn’t even make you feel better. It just makes you more difficult to deal with than normal!

When you’re panicking, you’re not thinking. You’re just feeling. And it’s not that feelings are bad, but when you allow only emotions to dictate your decisions, you’re really just asking for trouble.

If the Children of Israel didn’t go out to fight, they would have been stuck wandering around the wilderness for another 40 years. That’s what got their ancestors in trouble. These people were the descendants of the original Israelites who God rescued out of Egypt, the ones who choked when they had the chance to stand up. Moses wanted their children to do better.

Why? Because if you belong to God, He has already run ahead of you and prepared a path to victory for you. If you are following God, if you are doing what He has called you to do, He will open doors for you that couldn’t have possibly opened on their own. And when you come to face your enemy, you will find that God has already prepared you for what you’re facing. And if the God of the universe has personally prepared you for battle, there’s no chance you’re going to lose. Maybe it won’t feel like you’ve won right away. Not all victories feel like victories. But if God is on your side, you can’t lose.

So when you’re standing face to face with your enemy, whoever that might be, and you start thinking about how much bigger-stronger-taller-smarter-more-successful he or she might be, remind yourself of who God is and what God has promised you.