Good morning from Cincinnati, Ohio! I’m traveling for work this week, so who knows where I will be posting from tomorrow. But I’m running on five hours of sleep today, so if the interviews I get on film make any sense at all, it will be a miracle. So if you find typos in this, please be merciful.

I noticed something yesterday. Actually, I notice it every time I fly, but for some reason it stuck out to me yesterday more than it has in the past.

People only care about themselves.

Has anyone else picked up on that? It shocked me. Again, I know that. And I’ve seen it in many circumstances, but for some reason yesterday as I was trying to walk through the Chicago airport, this stood out to me more strongly than previous times. People paid no attention to me. They walked right in front of me, usually causing me to stop. They stopped right in front of me because there was something else they needed to do, and I nearly ran into them. And then they gave me a dirty look.

And that’s just walking around in the concourses. I’m not even talking about on the plane. People just want to get to their seats, and they don’t care how rude they have to be to do that. In six hours of traveling yesterday, I encountered one person who was thoughtful enough to offer me help, and that was another passenger onboard the flight from Chicago to Cincinnati who helped me get my carry-on bag back to the front of the plane because there was no more overhead storage. Because the rest of the passengers on the flight had crammed everything they owned into the overhead compartments so the rest of us with carry-on luggage had to check our bags. 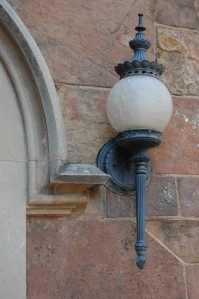 Don’t look out only for your own interests, but take an interest in others, too.

Being selfless is part of following Christ. Christ didn’t call us to look out for number one in our lives. He has called us to put other people first, to care more about our neighbors (which is everyone around us) than we care about ourselves.

I got to thinking about how the other passengers on that plane were acting and how most of the other travelers I encountered yesterday acted. I know that we live in a self-absorbed world, but I guess it really didn’t hit me how selfishness really affects everyone. And please don’t misunderstand me because I have plenty of selfishness issues myself. But it irritates me that people seem incapable of truly trying to help others.

But at the same time, I don’t think it’s intentional. I don’t think the people who I encountered in the airports yesterday left home with the plan to be rude and inconsiderate. I just think they’re not paying attention.

It’s so easy to get wrapped up in our little worlds and our little lives and forget that there are six billion people in the world who also have their own little worlds and their own little lives. Life is so busy and it’s so frantic that it’s easy to forget that other people struggle too. But that’s all a part of caring more about other people than we care about ourselves.

Selflessness isn’t our default. Our default setting is to look out for number one, but that’s now how Christ called us to live. And we need the Holy Spirit’s help to live like Christ did, which means on our own we aren’t capable of living the way Christ has called us.

This concept is heavy on my mind this morning because I’m dealing with a situation that could be very awkward if not handled properly. Basically I need to communicate something to someone who isn’t really interested in listening and who is pretty much in a position of authority over me. And it’s not something I want to do. It’s something I’ve been told to do — by someone in a higher position of authority than both of us.

I have to find the balance between getting the job done and being considerate. And I don’t think I can do that without God’s help.

I love the Message, and I love the way the Message puts this verse. So I’ll end with that and ask you all to pray for me today that I can figure out how to do what needs to be done without resorting to being inconsiderate.

If you’ve gotten anything at all out of following Christ, if his love has made any difference in your life, if being in a community of the Spirit means anything to you, if you have a heart, if you care— then do me a favor: Agree with each other, love each other, be deep-spirited friends. Don’t push your way to the front; don’t sweet-talk your way to the top. Put yourself aside, and help others get ahead. Don’t be obsessed with getting your own advantage. Forget yourselves long enough to lend a helping hand.