I know good people. They’re the kind of people I can trust will always do what’s right, even when it’s difficult. Those are good people to know, to surround yourself with, because they keep you honest and they usually experience good things as a result of their wise choices. Granted, they aren’t perfect. Nobody down here is, but there’s something about people who always do the right thing that is attractive and terrifying. You want to be friends with them, but you’re afraid of them at the same time because if someone always does what’s right, how do they feel about someone who usually ends up doing what’s wrong?

Most of the time those good people don’t even consider themselves good, and the ones I know certainly don’t. They’re just trying to follow Christ as best they can. And that’s one of the amazing truths about God is that He truly is good. There’s no one better. And because He is truly good, everything He does is right. 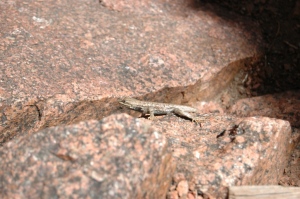 Lizard on a rock on a hiking trail at Glen Eyrie, Colorado Springs, CO

He is the Rock; his deeds are perfect.
Everything he does is just and fair.
He is a faithful God who does no wrong;
how just and upright he is!

There’s no second guessing with God. If He does something, it’s good. The Bible says that over and over and over again. So where does all the hurt and brokenness in our world from? Well, God didn’t create the world like this; He created it perfect, and we’re the ones who broke it. He’s doing the best He can with a world that refuses to listen to Him. If He wanted a world full of robots to do His bidding, He could have “fixed” our world long ago, but that’s not who He is. And those people who get angry at Him for allowing atrocities in our world would chafe against a solution like that anyway.

I don’t claim to understand everything. I don’t claim to understand God. Nobody can do that. But I would like to think I know His heart. I know what the Bible says about Him, and I believe the Bible. So when the Bible says He’s good, that means He is. The world isn’t good. I’m not good. People aren’t good. But God is. And He is working to make things good again for the people who follow Him.

Does that mean that everything that happens is good? No. But we’ve got to remember that the world is currently under different management than it was originally intended. God created it and gave it to us to take care of, but our first parents forfeited that right when they disobeyed, and Satan took over. Yes, God is ultimately in control, but right now Earth is under the governorship of Satan. We gave Him that right, but one day God will take it back. One day God will make everything right again. And until then, we have to trust Him.

So how does that help us today? Today we face a world that is more uncertain than ever. Personally, I live in a country that no longer recognizes itself. Like a rebelling teenager, the United States has pushed away from everything that is good and is striving to do wrong because we can. The rest of the world is already there, but the U.S. is running to catch up and the consequences are going to be disastrous. The whole world is running itself into the ground. I have to laugh about doomsday clocks and the Mayan calendar and all the other threats that say the world is going to end because the world is going to end, but not with ice or fire. The world is going to collapse on itself, rotted from the inside, trying to support a facade of self-righteousness that’s too heavy for something without a spine.

The world is changing by the hour, and most of those changes are bad. Or they will bring bad things, even to people who trying to live right. But because I know that God is good, I trust that He does good things and that He can take even the ugliest situation and make it beautiful.

So when everything goes wrong today, remember that God is good. We may not understand what’s happening or why, but if you’re a follower of Christ, nothing can happen to you that God can’t use for good.