Do you ever get so tired of running that you just want to give up? I do. I’ve heard it said that life is a race, like a marathon, and we’re running toward the finish. But I don’t think that’s accurate. I think life is a series of races. We’re not necessarily competing against others, though in some cases we are, but most of the time we’re just trying to reach the finish line. And when we finish one, we end up starting another. Or some of us are running multiple races at once.

Maybe a better example is a juggler. Everyone juggles. Some people juggle two balls. Some people juggle six. We juggle our career, our family, our hobbies, our dreams, our responsibilities, and our unpleasant tasks (According to Wash on Firefly, “Some people juggle geese.”), and the entire purpose in juggling is to be able to accomplish more at one time. Like running two races at the same time. If you can do more, you should. But the more you try to do, the more difficult it becomes. You have to run longer and harder; you have to have more balance or coordination. 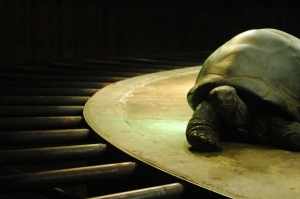 Patient endurance is what you need now, so that you will continue to do God’s will. Then you will receive all that he has promised.

Why do we run a race in the first place? And this can be metaphorical, because I don’t run. I’m not built for it. Even in an emergency, the best I can muster is a brisk jog. But why do we set out to accomplish something great in any situation?

Well, I believe we want to challenge ourselves; we want to grow, build our skills, increase our experience. Or we want to help other people. Usually there’s a goal when you set out to run a race or when you decide to take on another item to juggle. Running the race of life itself or just juggling life itself (your own life; not someone else’s) is difficult enough.

It’s never easy. And I’m not a “good enough” Christian to say that I’ve never wanted to stop. Sometimes there are so many things going in my life, sometimes I have so many balls in the air or so many races to keep track of that I don’t even remember why I’m doing it. And if you’re at that point, maybe it’s time to step back and reassess, because if you’ve forgotten your purpose, it’s a good chance you’ll say yes to anything. And we aren’t called to juggle ten balls for no reason.

Well, of course, it’s okay. God isn’t waiting around the corner with a sledgehammer eagerly anticipating the moment when you let down so He can smash you. That’s not the God I know.

Why are doing the things you’re doing? Why are you juggling the responsibilities that are on your plate? Who gave them to you? Did you accept them out of guilt? Or did you genuinely feel God calling you to take them up in the first place? There’s a big difference there.

If you accepted something to juggle or a race to run because you felt guilty about not doing it, most likely, that was your own pride speaking. Because God doesn’t work through guilt. Yes, guilt is an important aspect of coming to know Christ. You have to recognize it and understand that you are guilty, but once you come to Christ and ask Him to cleanse you, you aren’t guilty anymore. And God isn’t going to use guilt to pressure you into something you’re not ready for.

Remember also that you won’t juggle forever. You won’t run forever. Races have an end. And, yes, there may be another race waiting as soon as you finish one, but if you’re at the end of a race, why stop just short of finishing? Finish strong. It’s difficult, but it’s worth it.

What the writer of Hebrews is saying here is that God can be trusted to keep His promises. And there are many promises God has made that we will experience just by believing in Him, but there are a lot of other promises out there–promises that require us to run our races the best we can and not give up.

If you’re tired today, that’s okay. Everybody gets tired, and it’s okay to take a rest. It’s good to re-examine your purpose. But whatever you do, don’t give up. God has great plans for you, and He’s made you awesome promises. And if you walk away from the finish line when it’s in sight, you might be forfeiting more than just the race.