I can’t believe today is the last day of September 2013. How did it get here so fast? Yesterday it was August, and the day before that it was April. This year is sailing by faster than I even thought possible. Tomorrow is October, and the month is already scheduled full, practically every day. That means November will be here in the blink of an eye, and December always comes faster than I anticipate too. 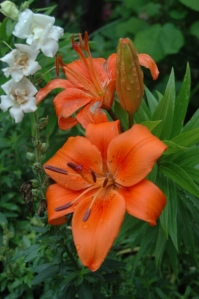 Understand, therefore, that the Lord your God is indeed God. He is the faithful God who keeps his covenant for a thousand generations and lavishes his unfailing love on those who love him and obey his commands.

It’s different when you think about Him that way. It’s one thing to recognize Him as creator; it’s something else to understand that He hasn’t changed at all from the person He was. He loved Abraham and Isaac and Jacob and Joseph and all of Israel through all of history in spite of their failures and flaws. He didn’t make allowances for them, but He loved them anyway. And He’s the same today.

If you read higher in this paragraph in Deuteronomy 7, you’ll find that it’s Moses delivering his departing words to the nation of Israel, and he reminds them that God didn’t choose Israel because they were a strong, victorious nation. He chose them because they were nothing. God likes making something amazing out of something insignificant. That’s the way He works. That’s the way He has always worked, demonstrating that He is the only one who can take nothing and make something from it.

That’s who God is. That’s the God I talked to this morning, and I shouldn’t take that for granted. I shouldn’t forget, because if He was faithful then, He’ll be faithful now. He kept His promises then, so He’ll keep His promises now. He never gave up on people who deserved it in the past, and He won’t give up on me today, tomorrow, or later on in my life. That’s not who He is.

So as fast as life flies and as busy as I get and as anxious as I become, God is the same through all of it. I can’t control events in my life, but God knows what He’s doing. He doesn’t stand back with his arms crossed, ignoring me as I walk this path He set me on. No, He’s paying attention. He’s watching, and He’s waiting for the opportunity to help. That’s how He worked in the past, so there’s a good chance that’s how He operates now.

Are you busy? Are you stressed? It’s the time of year for it, and it’s only going to get worse. But you’re not on your own. And you don’t have to tackle life and life’s challenges by yourself. If God set you on this road, He won’t step back and let you fall on your face. Trust Him. If you fall, He’ll catch you. You may not be able to control your life, but as long as you hang with God, you’ll be able to face it with your head held high.

You can’t control your life, but He can. He’s been doing it for generations and generations, and the people who trusted Him in the past were never disappointed.