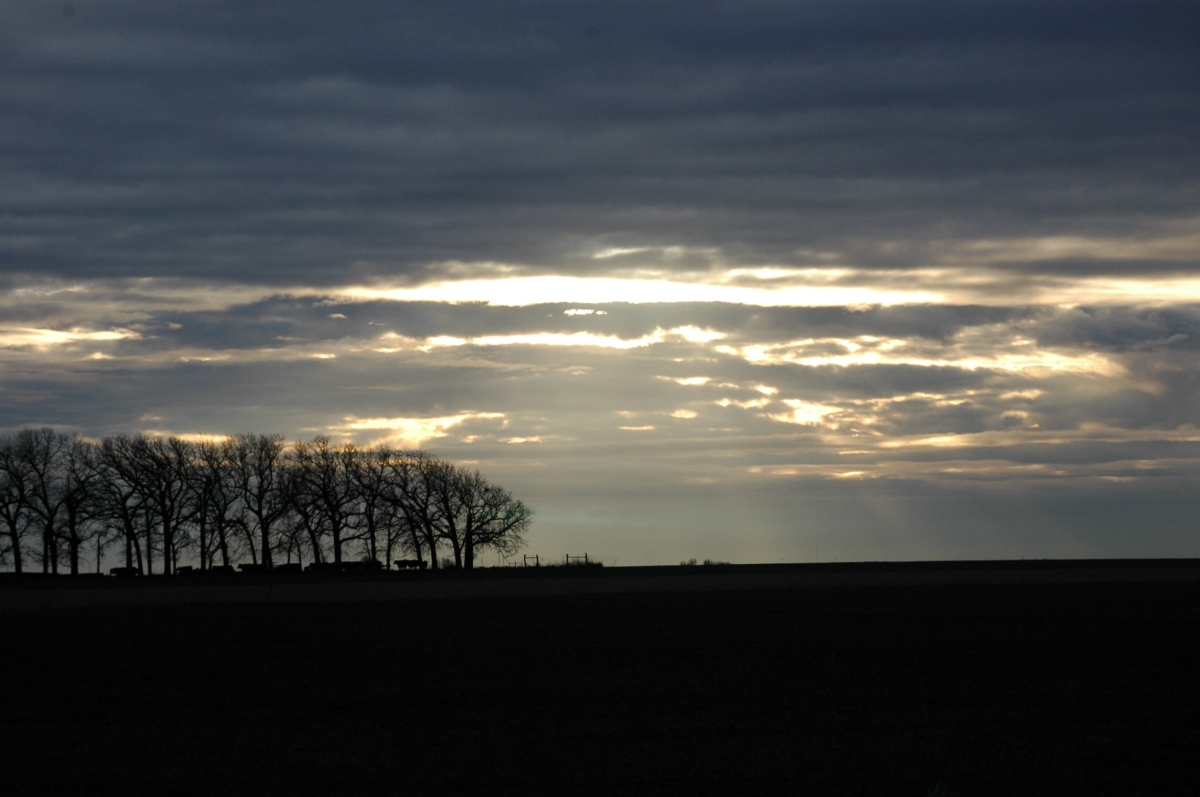 I’m always shocked when a good deed turns sour. Have you ever seen that happen? Have you ever watched something that started out good become so twisted and backward that it turned into a weapon? Before your eyes, an idea that was meant to help people became a tool to tear people apart. A pure, simple request can into a major issue that has people at each others’ throats.

Do things like that just happen? I don’t think so. It takes craftiness and skill to turn a pure, innocent idea into a raging tool of destruction. And if we as Christ-followers don’t keep our eyes open, we’ll be tempted to think that craftiness and skill comes from the people around us rather than its true source—our enemy.

Sunrise behind the clouds at Safe Haven Farm, Haven, KS

I posted recently about how predictable Satan is, but I didn’t really talk about how sneaky he is. And personally I think he takes great pride in how he can take someone’s good deed or someone’s good intention and twist them into something hurtful.

Maybe you’ve never seen him do it. It’s masterful. Completely evil but totally masterful. Say you want to buy flowers for a loved one. You have the best intentions in mind. You want to show that person how much you care. Well, when you get to the florist, their delivery people have a bad day and don’t drop the flowers off when they’re supposed to. So the person who was going to get the flowers late in the afternoon on a Monday gets them early instead, when he/she is in a meeting. And it interrupts them and breaks their concentration, and their whole day ends up spiraling out of control, and they’re angry about it when they were supposed to be happy. And that makes you angry because you spent your time try to do something nice for them, and it didn’t work.

That’s a pitiful example, but you get the idea. You can start with the best of intentions, but Satan can twist circumstances and (if they’re not paying attention) people’s perspectives to turn the kindest deed into a personal attack. When that happens, you have two options. You either go with your gut or you do what you know is right. Believe it or not, those two don’t always go hand in hand.

When somebody hurts your feelings, what do you do? When someone treats you like you’re stupid, how do you respond? When you feel like the person talking to you is talking down to you, what do you say in return? My reactions vary from sharp words to full-on tears, depending on who I’m dealing with. If it’s somebody who already intimidates me, you can bet I’ll be crying if they raise their voice at me. It’s embarrassing, but it’s true. If it’s someone I view as a peer or a friend, sharp words are likely, as much as I hate to admit it.

I don’t like being talked down to. I don’t like being treated like an idiot. And I really don’t like being interrupted when I’m trying to explain something. Maybe that’s pride. I don’t know. But it’s like pulling teeth to get me to back off and react with humility when someone is talking over me. But here’s the evil genius of the entire scheme: Most of the time the person talking down to you is only reacting to your tone. Or they’re just reacting to the tone of the person they talked to before you.

How many conflicts could have been ended before they even began if we just remembered that most people don’t want to fight? I mean, who really loves confrontation anyway? Yes, there are some difficult people out there, but generally speaking, people don’t want to fight with each other. They want to get things done. And getting bogged down in misunderstandings is a waste of time. Satan knows that. Why else does he keep turning us against each other the way he does?

He knows how it divides people and hurts people, and he loves to turn us against each other, especially if the people fighting are Christ-followers. Because the more he can drive us apart, the less effective we will be in accomplishing God’s purposes.

So the next time you find yourself embroiled in any kind of conflict, take a moment to just breathe and remind yourself that the person you’re talking to isn’t your real enemy. They’re doing the best they can in the situation, and maybe they started at you with sharp words, but sharp words in return aren’t going to help calm anyone down. Somebody has to back off. Maybe it should be you.

Satan wants us to fight each other, but it’s our choice whether to go with it or ignore him. Trust me. We’d all be better off if we ignored him. So stow the sharp words. Get your perspective back where it belongs, and remember who your enemy is.