Have you ever been driving and someone behind you is riding your bumper and acting like an absolute idiot? I’m usually okay at controlling what I say, but when it comes to bad drivers, a lot of my inhibitions fly out the window. Bad drivers upset me worse than almost any other person, mainly because in their irresponsibility they not only endanger their own lives but the lives of other people around them.

So after the guy who was riding your bumper needlessly for the last three miles zooms around you and disappears down the road at 90 mph, how do you feel? Relieved? Or vindictive? I hate to admit it, but a major part of me leans more toward the vindictive side. Then, suppose you encounter this driver again a little ways down the road, stuck on the shoulder with a flat tire or an empty gas tank. How do you feel then?

I wish I were a good enough Christian to tell you that I would pull over and have compassion on the poor idiot, but I’m not. Just being honest, I’d probably drive on and feel justified. After all, he’s getting the least of what he deserves. A flat tire or an empty gas tank isn’t a big deal, and it’s the least punishment he deserves for his reckless behavior.

On first blush, that’s probably the reaction everyone would have. That’s probably what any other driver would do. If the weather is okay and a gas station is close at hand, why not? Today’s verse tells us why not and reminds me that we’re not supposed to react like everyone else. As a Christ-follower, we are supposed to love. 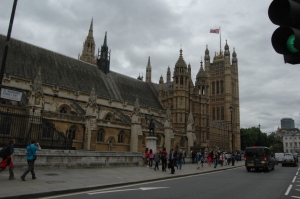 The Houses of Parliament, London, England

It does not rejoice about injustice but rejoices whenever the truth wins out.

The way I see it, this is different from a speeder being pulled over or a drunk driver being arrested. To me, it’s good to see justice done. It’s good to see that people will be held accountable for their actions, but that is something that a law enforcement officer has to do. It’s not my job to determine crime and punishment for people just like me. Rather, it’s my job to love others no matter what they’ve done to me.

It’s easy for me to rejoice when someone else receives what I think is owed them. It’s not as easy to love that person in spite of how they hurt me or how they offended me or how they inconvenienced me.

Yes, my gut instinct is to leave a bad driver on the side of the road. Maybe he’ll think about his carelessness as he’s waiting for someone to come along and help him. But as Christ followers we’re not supposed to live by gut instinct. We’re supposed to live as Christ lived. We’re supposed to do things the way Christ would have done them. And what would Christ do in this situation? He’d stop and help the person in His path, no matter whether He thought they deserved their life lesson or not. Why? Because that’s love. And love is a far better teacher than vindictive self-righteousness any day.

God is in charge of justice and revenge. God is in charge of doling out punishment. That’s not our arena, unless you’re a law enforcement officer or a member of the courts who are charged with upholding the law in our society. I don’t fit into one of those categories. I’m just an average Christ follower with a shamefully powerful tendency toward road rage. My job is to love people no matter what they’ve done to me.

You never know how God is going to use you. Sometimes love can teach lessons better than justice. Who knows? Maybe that person you stop to help would listen to you much sooner than they would listen to an authority. Maybe your one act of love helps save that person’s life as well as the lives of other drivers around him.