I hate not having the answers, but even more than that, I hate revealing to other people that I don’t know the answers. I won’t even ask for directions in the grocery store. Even if I spend an extra five minutes looking for that jar of pickles, I’d rather find it myself than demonstrate to someone that I don’t know where to find it. Isn’t that silly?

It’s probably my pride, which is something I struggle with constantly. I’m the clever one, the smart one, the one who always has everything under control, and I can’t find the pickles at the grocery store? Really? How embarrassing is that?

Now other clever, brilliant people I know can’t find the pickles either, but they don’t have a problem asking anyway. And if you think about it, which is a sign of actual intelligence? Asking where the pickles are? Or making a show wandering up and down the grocery store looking for it, where everyone can see you? 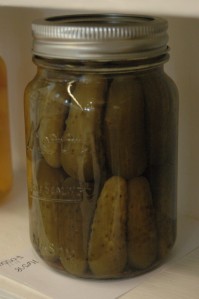 Last night, I got to have coffee with a wonderful new friend. It was a great time of encouragement, and I got the opportunity to ask questions about a very large, as-of-yet-unrevealed adventure I’m going to be embarking on this year. The thing about this adventure/project? I’ve never done anything like it before. I’ve never even come close to doing anything like this before, and for the first time ever I am completely at a loss of how to proceed. Oh yeah, I know the basics. I know the simple outline of how to do it, but the details? The possible pitfalls? The way to manage success or failure? It’s all new.

Not knowing what to do and being honest about it is new for me. Not to say that I always know what I’m doing. That’s rarely the case. But I never ever openly admit that I don’t know what the next step is.

But this is important. This is something I feel like God is calling me to do, and I want to do it right. I want to make wise choices, so I want to talk to people who have previous experience, even if that means I have to reveal that I don’t have a clue what I’m doing.

There’s a funny scene in The Forbidden Kingdom, a funny Kung-Fu movie with Jackie Chan and Jet Li, where the little teenage tag along is asking questions about Kung-Fu. Jackie Chan’s character has agreed to train him, but this crazy kid is so full of things he thinks he knows that he’s not learning anything. I think it’s relevant to this topic today.

That’s what I’m working on. Being open about how little I actually know, asking for help when I need it, and not being afraid to admit that I don’t know the answers.

But I probably still won’t ask for directions at the grocery store, because–well–spending a little extra time walking around is probably good for me anyway.