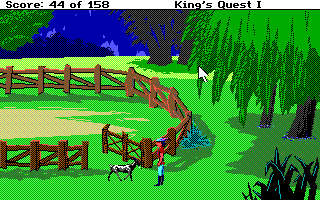 When I was very young, I started playing a computer game with my dad and my brother called King’s Quest. Amazing game. It required thinking skills and reasoning skills and the ability to type fairly fast. You moved your character with the arrow keys and typed instructions. Anything you wanted your character to do, you had to type it. Move rock. Pick up dagger. Swim. Jump. Play fiddle.

And there was one part in the first King’s Quest where you had to convince a goat to butt a troll off a bridge so you could answer Rumpelstiltskin’s riddle and get the beans to grow a beanstalk. (Nope. Not making it up.) The thing about the goat was that it wouldn’t follow you just because. You had to give it a reason to leave its pen, and that reason was a carrot you pluck out of the king’s garden.

So what on earth does that have to do with anything?

Well, if your Christian experience is anything like mine, then you’ve probably encountered some disappointments along the way. Am I wrong? You’ve chosen a path and walked down it faithfully, fully expecting God to turn up and work miracles as you go, and He doesn’t. Or you sacrifice and give up your dreams to pursue a course you think God has laid out for you, and you encounter nothing but difficulty every day until you finally have to turn around and go back to where you started. 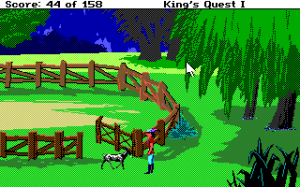 Let us hold tightly without wavering to the hope we affirm, for God can be trusted to keep his promise.

It’s not wrong to ask questions. Let’s get that straight before we go any farther. God wants us to ask questions. He wants us to be wise about our choices, and you can’t really be wise until you are brave enough to question what everyone tells you is true. Wisdom begins by understanding who God is and learning that it’s His opinion and His Word that matters. No one else’s.

But my goodness, it gets frustrating sometimes. I’m just being honest here. Sometimes I wish God would just tell me what He wants me to do. Or if He won’t do that, I want some kind of confirmation that I’m doing the right thing–a confirmation that sticks around instead of popping up momentarily and then vanishing without a trace.

Now it’s not wrong to look for signs. It’s not wrong to look for incentives. There are many times throughout Scripture where God says that He’ll bless us if we do something. But there seems to be an idea among Christians that faith is generally incentivized. We’re supposed to take great leaps of faith because God will reward us financially or in some other quantifiable, measurable return. And I’m not saying that’s not true. But should we be doing God’s work for the sole purpose of a return on our investment? Should we obey God merely because we want to get something out of the deal? Or should we do what God tells us to do because He told us to do it?

Hey, Christian, did you know that if you give to God, He’ll give back to you? Hey, Christian, did you know that if you live by what the Bible says, God will bless you? Maybe it starts with incentive, but it doesn’t end there. Maybe God does offer us incentives, but following Christ isn’t about what we can get out of it. It’s not about the incentives. Just like the game. It’s not about the carrot; it’s about who’s offering the carrot. It’s about getting the goat to fulfill a greater purpose than just hanging around in a pen for the rest of its life.

The incentives God offers us aren’t the point. God is the point, and God can be trusted. His promises aren’t flights of fancy or caprice that He forgets whenever it suits Him. No, when He makes a promise, we can trust that He will keep it.

So what incentive are you grasping at today? Are you sure you’re focusing on the right thing? Are you obeying God just so you can get something out of it? Not saying that’s bad or even wrong, but have you considered maybe forgetting the incentive and just doing it because God asked you to do it? Stop worrying about what you’re going to get out of it and just walk with God.

Get out of the pen, whether there’s a carrot involved or not. You won’t regret it.