Have you ever said something you didn’t mean? I do it frequently–more frequently than I care to admit. Mostly that’s because I have a really sarcastic sense of humor, and I’m fortunate to be surrounded by so many people who understand me. And the know that most of the time when I’m shooting my mouth off, I’m not really serious about what I’m saying.

Don’t you find it interesting that there’s a perceived difference between what people say and what they actually mean? We live in a culture of sarcasm and wit, and I think sometimes we say things we don’t mean to get a laugh, to catch someone’s attention, to make a point. But what matters more? What you actually say or what you actually mean? 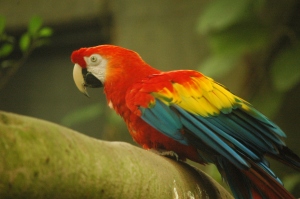 But the Lord said to Samuel, “Don’t judge by his appearance or height, for I have rejected him. The Lord doesn’t see things the way you see them. People judge by outward appearance, but the Lord looks at the heart.”

The Bible is pretty clear over and over again (not just in this Old Testament verse) that God looks at people in a different way than we do. What I love about this passage is that it deals with a human perspective versus God’s perspective.

God didn’t care that David’s brother was tall, dark, and handsome; he didn’t have the heart to be kind. Not like David.

God cares about the outside, sure. He’s as much responsible for the outside as He is for the inside. But because we can only experience what’s on the outside, that’s what we tend to judge by.

But when it comes to following God, it’s so much better to pay attention to the inside instead of the outside. Granted, we can’t see the inside. But God can. And that’s a sobering fact to remember.

Have you ever thought about the fact that maybe God isn’t listening to the words you actually say? What if He doesn’t care about what you actually say–they’re only words after all. And words are only as effective (or destructive) as the intention behind them.

How would your lifestyle change if you realized that you’d be judged on your intentions? If you were going to be held accountable not for your actions but for your purposes, what would our lives look like?

I don’t know about you, but I’d be in prison somewhere.

So what is the point of this? Well, it’s been shown over and over again throughout the Bible that God judges by the heart. And that means He knows our motivation and our purpose behind everything we say and do.

Does that make you think twice about what you were getting ready to do today?

Is your heart jealous? Is it hard and selfish? Is it hurt and lonely? Whatever state your heart is in right now, you can trust aren’t alone.

Words are important. Words are essential and vital, powerful and immensely important. But what matters even more than the words themselves is your motivation for speaking them.