Sometimes I wonder how God puts up with me. My moods are volatile and harsh, and I can go from praising Him one moment to wanting to give up entirely the next. I’m not exactly sure what the root cause of it is; I’m still working on that.  But most of the time my moods are exacerbated by people, and the quickest, most efficient way to plunge me into a pit of discouragement is to point out my flaws and failures. I don’t know if that’s the perfectionist in me or not, and it’s something I’m trying to do better about, because most of the time people are just trying to help. I know I’m not perfect, and I know I need help, but admitting that I need it is still somehow tantamount to failure in my mind.

And every now and then, I have one of those rough days where I feel criticized by everyone, and even when they’re trying to help, my brain translates it to, “You’re not good enough.” And pretty soon I’m drowning in a pit of discouragement so deep I have no chance of climbing out. And here’s the ridiculous part: I know I’m being silly, so I don’t want to talk to anyone about it. Why? Because even though I have already established that I’m not good enough, I’d like people around me to maintain their opinions that I’m at least competent and not a psychotic, emotional nutcase.

And it doesn’t stop there, of course. No, my brain is a fixer brain. I’m always trying to fix problems. So when I encounter those moments where my insufficiency becomes too much to bear, I start making plans of how to lessen the amount of trouble my failures are going to cause other people. And usually I do a pretty good job of creating scenarios where I can shift responsibilities and bow out gracefully so that other, better prepared, “good enough” people can take charge.

But as I was mulling over all of this last night in the throes of my despair, I realized how completely and utterly irrational I was being. I mean, this all probably stems from my own personal insecurity, and it’s never ever a wise idea to make judgment calls based on what your insecurities tell you about life and people.

I had a bad day. I got my feelings hurt. I had to endure some major stress that left me drained, and I had to act as mediator between people who don’t understand each other (for an introverted peacemaker there’s nothing more exhausting). And I had to face the fact that I’m not as good at certain things as I think I am. And after a weekend of that and a whole Monday of it in varying forms, last night I was just so emotionally distraught was about ready to implode. And I was going to make a decision that would affect my life for the next year?

Not the best idea ever. And that’s when I thought about a person in the Bible who I always identify with, the prophet Elijah. 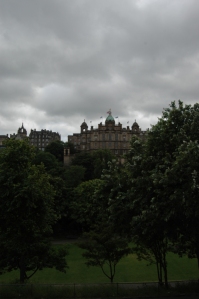 Edinburgh, Scotland on a cloudy morning

When Ahab got home, he told Jezebel everything Elijah had done, including the way he had killed all the prophets of Baal. So Jezebel sent this message to Elijah: “May the gods strike me and even kill me if by this time tomorrow I have not killed you just as you killed them.”

Elijah was afraid and fled for his life. He went to Beersheba, a town in Judah, and he left his servant there. Then he went on alone into the wilderness, traveling all day. He sat down under a solitary broom tree and prayed that he might die. “I have had enough, Lord,” he said. “Take my life, for I am no better than my ancestors who have already died.”

Then he lay down and slept under the broom tree. But as he was sleeping, an angel touched him and told him, “Get up and eat!” He looked around and there beside his head was some bread baked on hot stones and a jar of water! So he ate and drank and lay down again.

Then the angel of the Lord came again and touched him and said, “Get up and eat some more, or the journey ahead will be too much for you.”

So he got up and ate and drank, and the food gave him enough strength to travel forty days and forty nights to Mount Sinai, the mountain of God. There he came to a cave, where he spent the night.

I’m going to cut it off there this morning because I’m already rambling, but the whole story here is in 1 Kings 19, though I’d encourage you to read 1 Kings 18 too.

The point I’m getting at here is that it’s never a good idea to make decisions when you’re emotionally exhausted. We all get to that point. We all have been there, where we’ve faced so many discouraging situations that we can’t bear another one. Everyone reaches that point in their life where they’re ready to implode or explode (it usually depends on if you’re extroverted or introverted). And sometimes when you’re at that point, you’re going to be tempted to make decisions. You’re going to be so discouraged that you won’t be able to say anything positive about anyone, especially yourself. And if you’re normally a perfectionist, you’re going to turn all of that loathing and frustration inward anyway, so all your decisions will involve removing yourself from positions of authority to make way for other people who are better than you. You’re going to be so tired of all of it that you just want out.

Elijah had just called down fire from heaven. He had just led the beginning of a revolution in Israel. And all it took was one little threat from a crazy woman to send him scuttling for the hills in terror for his life. Exhausted and discouraged, he just wanted to pack it all in and give up.

And what did God do? He sent an angel to feed Elijah. And Elijah rested and slept and ate and rested some more. I think we blow past that a lot, especially the performance-driven people among us.

Later on in the story, God and Elijah have a little heart-to-heart, and it really comes down to the fact that God needed to help Elijah get his perspective straight. But it started with rest and food. It started with taking a moment to restore himself physically.

It’s really easy to make important decisions when you’re upset. It’s cathartic almost because when you’re discouraged and angry, making a decisions helps you feel like you have control of something. It’s something to hold on to. But it’s not wise. When you’re angry and discouraged, you aren’t seeing straight. You aren’t thinking straight. You’re thinking about you, and that’s not necessarily bad, but it’s not the time to make important decisions.

So when you’re sad and discouraged and upset and frustrated and you’re tempted to start making judgment calls to help yourself feel more in control, stop. Never make a decision when you’re angry. Table it. Walk away from it. Sleep on it. Come back to it in the morning, and I promise it will make more sense. It won’t be as harsh as you thought it was. It won’t feel like a personal attack, and even if it is a personal attack, you’ll be able to see it more clearly.

God didn’t give up on Elijah, even when Elijah gave Him plenty of reasons to. God won’t give up on us either. But we can help ourselves out by saving the decision making for the times when we’re seeing the world the way it’s supposed to be, instead of through our own hurt feelings.