In business and in life, it’s a good idea to know who you’re talking to before you start a conversation, especially if you have a request. I learned that by submitting manuscripts for publication. I didn’t really read literary magazines previously, but I kept submitting stories to magazines where they didn’t fit. And the stories, even though they were good, would be rejected, not because of bad grammar or poor writing but simply because they didn’t work with the context and the design of the magazine itself.

Something similar happened to me yesterday. I work for a medium-sized plumbing, heating and pipe joining manufacturing company, and we have a large warehouse in McPherson, KS. Since I’m the company’s press contact, I get all the random emails from our website. And this one had me giggling for about an hour.

Basically some charity that supports cats and cat-related groups is having a charity fireworks booth in July and wanted to know if we had a company newsletter we would be willing to allow them to advertise in. Now, apparently this group is in McPherson, but that’s the only thing we have in common with them. We make pipes. We design plumbing systems. We have nothing to do with cats (most people I work with don’t even like them), and we can’t have fireworks in any of our facilities. And while it’s a very nice thought, I just don’t think this person did their research before asking. And, on top of that, do cats even like fireworks? Mine don’t. The whole thing just made me smile. 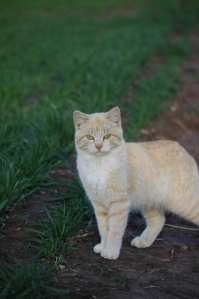 This is what the Lord says:
“Don’t let the wise boast in their wisdom,
or the powerful boast in their power,
or the rich boast in their riches.
But those who wish to boast
should boast in this alone:
that they truly know me and understand that I am the Lord
who demonstrates unfailing love
and who brings justice and righteousness to the earth,
and that I delight in these things.
I, the Lord, have spoken!

I think this set of verses is fascinating because it’s one of the only times where the Bible gives us permission to brag about something. There are other times where Scripture says we are allowed to brag, but it’s always about what God has done or what He’s doing. But this is permission to brag about how well you know God (note it says if you wish to boast, so I get the feeling it’s probably not the best idea to boast anyway, but if you simply must, this is the topic God says is okay).

So … we can boast about how well we know God. But the question is, do you really know Him? I mean, it’s hard enough to know people you work with on a daily basis. So is it even possible to really know God?

Well, I think so. Mainly because God has nothing to hide and He’s laid everything about Himself out in the open for us to find in the Bible; we just have to look for it. Everything we need to know about God is in Scripture, so if we read Scripture, we’ll know God. But I think there’s another level of knowledge too beyond just reading Scripture. You have to read Scripture and apply it to your life. You have to take the things God says to do and do them. And that’s what really makes the difference. That’s like meeting a pen pal you’ve only exchanged letters with. Because when you do the things God has told you to do, that’s when you really meet Him. That’s when you really experience what it means to be a Christ follower.

How many times do we request things from people we don’t know? I’ve got to call my electric company because I’m pretty sure they have my meter set wrong, but whoever I speak to at the company is going to be someone I don’t know. So I don’t know what they will be capable of doing. I don’t know if they can help me or not, and I’m going to have to dig to be transferred to the person who can. It’s the same as asking a plumbing company to promote a fireworks stand for the benefit of Kansas cats.