I actually sat down and watched a basketball game on television on purpose last night. In the last three years, this has happened on more than one occasion, mostly because my college, Wichita State University, has a pretty awesome basketball team.

Both teams did a fantastic job, and while I was definitely rooting for the Shockers, I was impressed by the Jayhawks too. The game was great, but something happened that really broke my heart.

It was in the final minute of the game. WSU was going to win. It was unavoidable by that point, but the Jayhawks were still trying to get a basket. And someone on the court (I don’t know who) got in a last-second three-pointer. It was a beautiful shot!

Maybe a few did. But the vast majority of the KU fan base that was in the crowd didn’t cheer at all. Or if they did, I didn’t hear it.

Seriously? One of guys on their team scored a three-pointer at the last second and nobody cheered? Sure, it didn’t win the game. Sure it wasn’t going to help them win the game. But it was still a really impressive shot. Don’t they deserve recognition and encouragement for that?

Maybe it didn’t bother anyone else. But it bothered me. Because I see the same thing happen in our own lives over and over again. 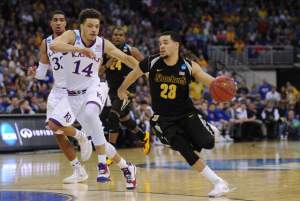 So encourage each other and build each other up, just as you are already doing.

It’s easy to give up on people, isn’t it? It’s so easy to just write people off, because the less you get your hopes up, the less you risk being hurt. And while there is wisdom in distancing yourself from truly foolish people who never learn, God never calls us to give up on anyone.

Just because you think you have it all together doesn’t give you the right to point out the failures in someone else’s life. But for the grace of God, you might be in the same place.

Following Jesus is a process. Yes, when you make the choice to follow Him, your sins are forgiven fully and immediately. That happens all at once. But learning to live for Him? Learning to turn away from your old life and cling to the new one? That takes time. And, unfortunately, it takes falling down frequently.

Maybe you know someone who has screwed up their life. Maybe you know a Christian who has screwed up their life. That doesn’t make them not a Christian anymore. Even the Prodigal Son got screwed up in Luke 15 because He had his eyes on something His Father hadn’t intended for him, but that didn’t mean he was no longer a son. He started in the Father’s family, and when he came to his senses, the Father was waiting for him.

Christians are going to screw up. We’re going to fall flat on our faces because we’re human and we’re not perfect. When that happens, it’s our responsibility to repent. We need to change our thinking and recognize that what we’ve done is wrong and not what God wants for us. That’s part of being a Christian. But the last thing a Christian who’s stumbled needs is another Christian refusing to support them because they’ve messed up.

No, don’t deny the sin. Call it what it is. And don’t make excuses for their choices. They had a choice, and they made it. But if they’ve turned away from it, if they’ve changed their mind about that behavior, don’t keep rubbing it in their face. God has forgiven them. Why can’t you?

Instead, encourage them. Remind them how much God loves them. Remind them what it means to cling to God’s grace. Tell them what God has done in your own life, and love them unconditionally–the same way Jesus loves you. And when they make a choice that will bring glory and praise to God, cheer them on.

No, one good choice can’t make up for all the bad stuff they’ve done in the past. But the same is true for you, Christ-follower. Maybe they lost the battle, but that doesn’t mean they should give up. Just like you shouldn’t give up on them.

Do you know someone who’s struggling? Do you know a Christian who has completely screwed up his or her life? Are they doing all they can to follow God? Cheer them on.

They might have lost a battle, but the war isn’t theirs to win anyway. And it’s not yours either.