I didn’t get to do some of the things I’d planned to do last night. I had every intention of getting some laundry done, and I wanted to do my dishes (seriously, I promise). But doing dishes would require me to stand by the window in the kitchen, and last night when I had planned to do my dishes, another massive storm swept through here. The sun is still coming up, so I haven’t been outside to check the damage, but three miles south of me reported tennis-ball sized hail. And I’m pretty sure I heard some that big when they were hitting the house. And when you have tennis ball size hail and 75 mile per hour wind, standing in front of a window isn’t a good idea.

So I sat in the basement, watching the weather reports so I would know how to prepare for what was coming. It was more than one storm cell with lots of pink, red, and yellow. But as I was sitting there, I got to thinking about all the things I could have been doing. Even as the hail started coming down, I thought about the things I would have been able to accomplish if the storm hadn’t interrupted me.

And then I kicked myself. Not literally because that would have taken dexterity I’m not capable of. But mentally because I had some things I could do remotely, using my netbook. Technology is a wonderful thing. So as the storm raged outside, I worked on drama team planning and some of the other writing projects I’d put off because I didn’t have time for them.

No, I didn’t get the dishes done. And my laundry is still dirty. But I did get quite a few things done in spite of the storm. 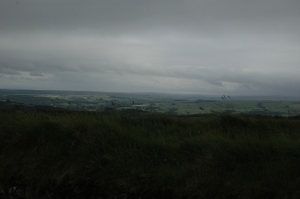 Make the most of every opportunity in these evil days.

Storms are going to come in our lives. Some are worse than others. Some leave us feeling beaten and battered, and others are more of an annoyance than anything else. But kind of like living in Kansas, if you don’t expect the storms, they’ll blow you off your feet. And if you don’t have a good foundation, you won’t be able to stand up.

I think that’s part of the Christian life, honestly, is learning how to keep focused and keep doing what God has called you to do even when the storm is raging around you. It’s not easy, but God calls Himself a shelter and a safe place for a reason.

If there’s a storm blowing outside or even if you’re waiting for a storm to get to you because you can see it coming, you have a choice on how to handle it. You can hide from it or you can embrace it. And when I say embrace I don’t mean run outside and take photographs, although that’s perfectly fine. I’ve done my fair share of that.

You don’t have to stop working just because a storm rises up around you. Do what you need to do to survive it and push forward. Your other choice is to cower in fear of it and do nothing.

So if you’re facing a storm today, don’t be afraid of it. God lets storms into our lives for a reason, and He never leaves us to face them alone. Ask someone for help. Tell someone what you’re feeling. And whatever you do, don’t focus on the storm. Focusing on the storm is what got Peter in trouble when he walked on water with Jesus. Instead, focus on Jesus. Focus on what He’s doing. Focus on what He’s called you to do.

You’ll be amazed at how the size and scope of the storm fades when you do that. And what’s more, you’ll be shocked at how quickly the storm passes.