I am my own worst critic, and I’m ruthless about it. I always have been. I can’t believe some of the horrible things I’ve said to myself, terrible, hurting things I wouldn’t say to any other person. But I don’t hesitate to say it about myself.

On one hand, being self-critical is good. You should always be open and aware of how you can improve yourself or how you can do a job better, but when it crosses the line from constructive criticism to general bashing, you need to stop. It’s not helpful. And it’s not true.

It’s okay to love yourself, you know. I think we take that concept out of context too many times. The Bible talks about loving others as we love ourselves, which means obviously we are supposed to love ourselves. But if I treated others the way I treat me? Whew, that would be brutal. 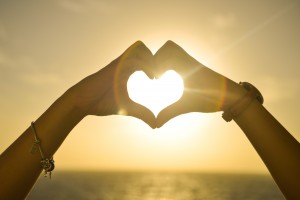 We know how much God loves us, and we have put our trust in his love. God is love, and all who live in love live in God, and God lives in them. And as we live in God, our love grows more perfect. So we will not be afraid on the day of judgment, but we can face him with confidence because we live like Jesus here in this world. Such love has no fear, because perfect love expels all fear. If we are afraid, it is for fear of punishment, and this shows that we have not fully experienced his perfect love.

God’s love is unconditional. That’s really difficult to wrap my brain around, because I’m a performance-driven perfectionist. In my brain, if I work hard enough, that means that God will love me more. But unconditional love has no conditions. That means it doesn’t matter how hard or how little I work. God loves me the same.

Can we even grasp that kind of love? I’m not sure I can. But if that’s the case and there’s nothing I can do to make God love me more or less, why am I so hard on myself? Why do I beat myself up all the time and focus on every failure and cling to every disappointing decision I’ve made?

There’s a part of me that fears what God will say to me when we meet face to face. I’m afraid that He’ll point out to me all the times I could have done more, all the opportunities He gave me that I ignored, all the things I should have done and didn’t. But if we’re afraid, that means we’re not living in God’s love.

What does it mean to live in God’s love? It means that you aren’t scared. Not that you’re fearless (although you probably can be). Everyone still has things they’re scared of–the dark, clowns, angel statues (Don’t Blink!), but being scared of something is different than living in fear. When you live in fear, your whole life revolves around what you have to do to make God happy with you. All you can think about is how you need to perform because you’ve got to make God love you.

Here’s the news, friends. God already loves you. And there’s nothing you can do about it. So just deal with that right now.

And because God loves us, we can live confidently, unafraid of what might be ahead of us. That means tearing yourself up for your past mistakes is a waste of time. That means focusing on the things you did wrong yesterday won’t accomplish anything.

God doesn’t make mistakes. Not ever. And if He loves you, don’t you think you ought to love you? Maybe just a little bit?

You don’t have to do anything to earn God’s love. You’ve already got it. So stop living your life to impress Him and start living His love so that others can experience it.

You can be the most talented person in the world, but when you are faced with the one topic you are insecure about, you’ll shut down.

Regardless of what you’re insecure about, when you’re thinking about it calmly, you recognize that your insecurity is a weakness. It’s an area where you need to be stronger. You know that. But in the heat of the moment, when you are faced with a situation that frightens you or when you have to make a snap decision, it’s easy to fall back on what we know, and the one thing we all know is our own insecurities.

But insecurities make us feel not secure. That’s why they’re called insecurities! And maybe it’s comfortable to fall back on them, but what if you had something stronger to hold on to instead? Wouldn’t that be a better idea?

By his divine power, God has given us everything we need for living a godly life. We have received all of this by coming to know him, the one who called us to himself by means of his marvelous glory and excellence. And because of his glory and excellence, he has given us great and precious promises. These are the promises that enable you to share his divine nature and escape the world’s corruption caused by human desires.

God has given us all a list of promises miles and miles long. God has made so many promises that we don’t have time to talk about them all. And, what’s awesome, is that He’s kept all of the promises that He’s made.

He always keeps His promises. That’s who He is.

So instead of falling back on your insecurities, what about trying to fall back on God’s promises instead? It sounds like it should be easy to do, but it’s a difficult habit to get into, especially when you’re accustomed to relying on your own strength.

Example? God has promised that if you give to His work (i.e. tithe) that He will open the windows of heaven and pour out blessings so numerous you won’t be able to contain them all (Malachi 3:10). This is a promise. And to take God at His Word, that would mean you would start giving to God, whether you think you have the finances to give or not. And then you just trust that God will provide for you.

That’s all there is to it. You live life trusting that God will do what He says He’ll do. You make decisions based on what God has promised to do for you.

I don’t like speaking in front of people. I despise getting up and talking in front of crowds. But it’s part of this career path God has me on right now. I don’t like it because I can’t always think of the right things to say, and I’m terrified that I will come off looking like a fool. I get so scared that I will be a poor representation of Christ because I babble like an idiot. But God has promised before that He will give His children the words they need to say when they need them.

So when it comes down to the choice of speaking in front of a group or not, what do I do? If I’m going to fall back on what’s familiar, I’ll lean on my insecurities. Those insecurities tell me I’m a horrible speaker, that I’ll say stupid things, that I’ll make mistakes and confuse people. Those are my insecurities. And they’re not helpful.

So what decision are you facing today? Are you leaning on what your insecurities are telling you about yourself? Or are you thinking about what God has promised you instead? If you’re cowering in fear, I guarantee, it’s not God you’re listening to.

Hold on to God’s promises. He always keeps them. Trusting your insecurities will only leave you insecure and unfulfilled. Which choice do you think is better?