I’m not a big sports fan. Never have been. Something about being naturally clumsy and the least competitive person on the planet. But, oddly enough, I do enjoy watching the Olympics. This year was quite a year for Team USA, and not just for our swimming (that Katie Ledecky, man) and gymnastics teams.

We’ve got over 100 medals, around 40 of which are gold. That’s outrageous. Granted, the U.S. had more than 500 athletes competing this year. That makes a difference. But that doesn’t change how cool it is to get to hear the national anthem so many times in so many different sports.

What I find most interesting is that after I watch the U.S. win at the Olympics, I often feel like a champion. But the athletes are champions. They worked hard. They sacrificed. They risked everything they had invested to put their skills to the test against the top athletes in the world, and they came out on top. They deserve the medals they wear. So how does that translate into me feeling like a winner?

Every Team USA athlete who competed in the Olympics this year was a representative of his or her country. He or she went to the Olympics to represent me (broadly speaking). So when he or she wins, America wins. I win. We send the best of our best (and this year, I feel like I can actually say our best truly are the best and not just in their physical skill but in their character as well), and when they win, we get to claim the victory with them, even though they’re the ones who did the work.

That’s basically what God did. There was a battle that needed to be won, and all our futures hung in the balance. So He sent His best—His only Son—to fight for us, to take our place and our punishments. And Jesus won. So because He won, we all won (Romans 8:37). Or, at least, we all have the opportunity to win. There is the matter of choosing a side, of course.

It’s done. It’s over. The war is finished, and the victory is God’s, and by extension ours, if you are a follower of Christ. But that doesn’t mean we won’t still face daily battles.

All those Olympic athletes had to come back to the real world after Rio. They had to leave behind the battle fields they were used to and forge into an unknown future, possibly in areas and fields they know little about. Even the G.O.A.T. has to pay bills.

[su_pullquote align=”right”]Even though it feels like we’re the ones fighting, victory is always God’s.[/su_pullquote]

Every day is still a battle. But does that mean we’re on our own? Never. (Deuteronomy 31:8) God says over and over again that He’ll never leave us. He’ll never make us face our battles alone. But there’s something we’ve got to remember, folks. Even though it feels like we’re the ones fighting, victory is always God’s.

He gives us the strength to face the challenges of the day. He gives us the energy to keep fighting when we feel like we want to quit. He helps us stand up when we fall down, and He gives us a reason to keep pushing long after our personal motivation has run dry. He’s the only one big enough to turn the tide of a battle in His favor.

So because victory is His, that means we have to wait for Him to achieve it.

Victory doesn’t happen overnight. You can’t win an Olympic medal on a whim or by accident. Competing in the Olympics takes years of practice and hard work, strategy and intense concentration, and fierce, intentional choices. Do you think winning a battle is different? It takes time. It takes effort. It takes dedication, passion, and, yes, sometimes even failure. Or maybe it just feels like failure, because often failure is just another opportunity to rise to the challenge.

Because of Michael Phelps, Katie Ledecky, Simone Biles, Tianna Bartoletta, Amanda Elmore, Virginia Thrasher, Helen Maroulis, Connor Fields, Brady Ellison, David Boudia, Daryl Homer, and so many others who won a medal (or medals) at Rio, I can say I am a citizen of a winning country. I belong to a nation that allows people to chase their dreams, to work hard to make their dreams a reality. And even though I’ve never swam a competitive lap in my life, never ran any distance, never shot with any accuracy, and only mastered the belly flop as a form of diving, I get to enjoy victory because all those people and others achieved it for me.

Because of Jesus, I’m a citizen of Heaven. I’m a child of God, with free access to His throne, invited to approach Him whenever I need Him. I don’t have to worry about tomorrow. I don’t have to fear what I don’t understand. Jesus won my battles for me.

But Michael Phelps didn’t swim faster because I asked Him to. Virginia Thrasher didn’t hit those targets with her air rifle because I told her it was time. All of those athletes competed at their own speed, their own rates, and according to their own plans. So why do I think Jesus is going to be any different?

Victory isn’t mine. It’s His. And that means I have to wait for His timing instead of pushing my own agenda.

[su_pullquote]Victory isn’t mine. It’s His. And that means I have to wait for His timing instead of pushing my own agenda.[/su_pullquote]

I don’t like waiting. Once I know the direction I’m pointed, I want to forge ahead without looking back. And while that may be an admirable trait at times, when victory isn’t up to me, that sort of impatience can spell disaster.

We all have a choice when it comes to obtaining victory, even if we’re not the ones fighting for it. You can try to fight for yourself, sure. But that will be like a regular human being trying to race Michael Phelps in a pool. You can try to win, but you aren’t going to. Sorry to break it to you, folks, but that’s just not going to happen.

So if you can’t fight for yourself, you have to fall back on the other option. You have to let someone else fight for you. And that means you have to wait for them to make a move. Waiting isn’t fun, but if the person you’re cheering for has your best interests in mind, you’ve got nothing to worry about.

As for me, I look to the Lord for help. I wait confidently for God to save me, and my God will certainly hear me. Micah 7:7

Tired yet? It’s only Tuesday, and my feet are already dragging.  Judgement House, the outreach drama my church puts on every October, is an amazing ministry. There is no other ministry I love being a part of more; however, I can tell you there’s no other ministry that exhausts me more.

We finished on Sunday, and now I’m trying to remember how to live a normal life again, without spending every waking moment ensuring that tour groups have a guide to lead them every ten minutes.

Like so many other people who volunteer for Judgement House, I work a full-time job. And it’s not just a job; it’s a very stressful job. I love it, and I’m thankful for it. But it’s fast paced, high tension, and 100 percent necessary to be able to think on my toes. All of the above are difficult when I’m physically, mentally, and emotionally worn out. 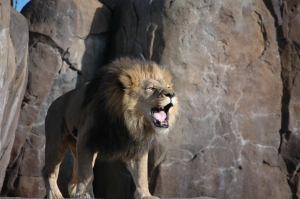 The Lord gives his people strength.
The Lord blesses them with peace.

I love the Bible. Seriously, any question you have, it has an answer. Like this. Where do you get strength? Ask God.

Think about that. If you follow Christ, you are one of God’s people. And God will give his people strength when they need it.

I will admit: I almost didn’t use this verse today. Why? Well, it’s obvious. Isn’t it? Of course, we get our strength from God. Of course, God gives us peace. Where else would we get it from? Granted, we can look for it elsewhere, but we won’t find it. And if you’ve been following Christ for any amount of time, you’ll know that nothing else satisfies like He does.

Honestly, this verse didn’t grab me until I read the whole Psalm. Yes, God gives his people strength. But what does that mean? How can we wrap our minds around the kind of strength that God is offering to us? That’s what the rest of the Psalm is about. This is a wonderful verse, but it’s impossible to grasp the immensity of this promise until you read the rest of it.

The Lord rules over the floodwaters.
The Lord reigns as king forever.
The Lord gives his people strength.
The Lord blesses them with peace.

Do you see? Do you get it? God’s voice alone can split the sky, tear massive trees apart, and cause mighty mountains to tremble. Literally. That’s just His voice.  Imagine what the rest of Him can do. And He offers that strength to us.

So if you’re tired today, whether you volunteered at NewSpring’s Judgement House or not, know that it’s all right to be tired. We’re all human. We all run out of steam. But we don’t have to stay exhausted. God is standing by waiting for us to ask for His help.

God has offered His strength to us. And I, for one, intend to take Him up on it. Because coffee, though wonderful, can only accomplish so much. To get through a day when I’m tired to my soul, I need strength that doesn’t come from me. And thanks to Jesus, all I have to do to get it is ask for it.