Have you ever heard yourself say something and cringed inside? I have. When I’m overly tired or stressed out, sometimes my mouth runs away with me. I have a sarcastic streak too, which can be very funny when it isn’t being used for the forces of evil. 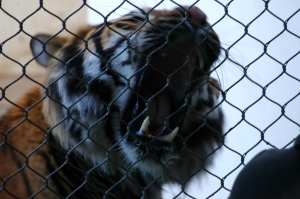 A tiger showing his teeth at the Sedgwick County Zoo, Wichita, KS

People don’t like fighting. Maybe they like arguing or disagreements, and arguing and disagreement are part of every healthy relationship, whether you’re best friends or married or even family. But from my experience, people don’t like a real fight, especially between two people who care about each other.

So why does it feel like we go out of our way to start fights sometimes? Our culture has certainly dramatized relationships to the point where people like to see domestic strife on the television, but in real life it’s not always exciting or romantic–it’s miserable.

Whatever kind of relationship you’re in, it’s important to understand that answering a cruel word with more cruel words will only make a situation worse. If the person who started the fight is already that upset, fighting back isn’t going to scare them. It’s just going to make them angrier.

Yes, it’s true that some people just want to fight. Some people are just angry as a general rule. But generally speaking even people who start fights don’t really want to fight. There’s usually something else causing their problem, and they’re either too scared or too insecure to talk about it openly.

So what do we do? What can we do? It’s hard to stay calm when someone comes at us in a fighting mood, but I promise if you refuse to engage with them like they’ll run out of steam. And most of the time, if you’re close enough friends, they’ll tell you what’s really going on. Or they’ll give you enough clues that you can figure it out yourself.

The point is, whether you’re the offender or the victim, harsh words never help anything. They may make you feel slightly better when you’re saying them, but that good feeling only lasts until the fight starts.

Answer cruel words gently. And if that doesn’t work, if the person you’re talking to doesn’t calm down, stop the conversation or leave. If he or she is that upset, nothing you can say will make it better until they calm down on their own.

Fighting won’t solve the problem. Fighting only hurts feelings and separates friends, and I don’t know about you, but that’s not something I ever want to do.