I am always amazed at how big God is. It’s wintertime now, which means it’s the best time of year to go stargazing, and if you don’t mind dodging wildlife, you can see more stars than you can imagine from my driveway. It’s those clear, crisp, quiet evenings when I’m trying to count the stars I can see and utterly failing because there are so many that make me wonder at God.

A popular late-night talk show host was talking to an actress on his show the other evening, and he is of the opinion that if there is a God, He has more important matters to deal with than us. But the Bible tells us differently. The Bible says God made everything and holds everything together and still wants to be a part of our everyday lives.

And this isn’t something that just happened in the New Testament. No, God was in relationships with His people starting in the Old Testament, in the very first book of the Bible. 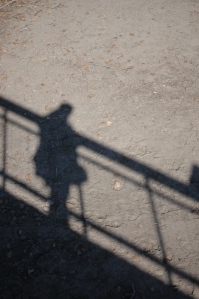 My shadow at the Sedgwick County Zoo, Wichita, KS

“I am God, the God of your father,” the voice said. “Do not be afraid to go down to Egypt, for there I will make your family into a great nation. I will go with you down to Egypt, and I will bring you back again. You will die in Egypt, but Joseph will be with you to close your eyes.”

This is a promise that God made to Jacob, who is considered to be one of the Patriarchs of Israel. It started with Abraham, who I mentioned on Wednesday. Abraham had a son named Isaac, and Isaac had a son named Jacob. And for those of you who know the Bible, you probably know where this passage comes from. Jacob’s youngest–most beloved–son Joseph had established an abundant and prosperous life in Egypt through God’s grace (read the story; Genesis 37-50; it sounds long, but it’s one of the most amazing stories you’ll ever read), and he had invited his father to come down and live with him because where Jacob lived was in famine.

Here’s the thing: Egypt was always considered a bad place. It was a place of pagans. It was a place of evil. And Canaan, where Jacob’s family was, had been given to his family. It was the Promised Land. So it’s no wonder that Jacob didn’t want to leave.

So this is what God told him: Go anyway. And God promised that He would go with him. God promised to go with Jacob into Egypt and promised to bring his family back out again. And if you keep on reading into Exodus, you’ll find out that’s exactly what God did.

But what stood out to me this morning is that no matter where we go, God will be there. And if God has told us to go somewhere, He’s going to go with us. There are examples all throughout Scripture about how people have tried to run from God (Jonah, being the best-known example), but in every case, what they discovered is that you can’t run from God. How can you run from Someone who is everywhere?

You can’t. It’s like playing hide and seek with your own shadow. You can’t get away because it’s always constant. Maybe you can’t always see it, but it’s always there. And it’s the same way with God.

So what does this mean today?

Well, for one, don’t try to hide from God. That’s silly.

And two? If God tells you to do something or go somewhere, don’t be afraid. He’ll go with you no matter where you go. He’ll be standing right beside you in those moments when you have to make a choice. He’ll be cheering for you when you do what He’s called you to do. He’ll be there. He promised.