Do you buy new brands at the grocery store? Or do you stick with the brands you have always bought? How brave are you in trying new things? I work in marketing, and one of our biggest goals is to familiarize people with our brand name. We want people to know our logo and our products and our history so that when they see our products in the store, they’ll know it’s us. Because if people know our name, that means they know they can trust us. 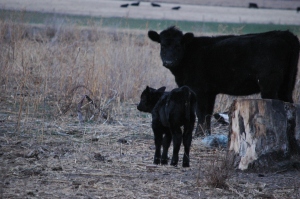 Cows in the pasture at Safe Haven Farm – Haven, KS

Today’s verse is Psalm 9:10.Those who know your name trust in you,
for you, O Lord, do not abandon those who search for you.

It’s amazing to me that some people can’t trust God or won’t trust Him. I don’t understand how they can live their lives without trusting Him, but if you ask them about it, they just don’t believe He exists or that He’s listening or whatever. But that makes no sense to me. To me, if there is nothing else certain in the universe, it’s that God is here and He cares about me and wants to help me.

Okay, so I bought a generic brand of toothpaste one day. It was during a financially sparse time in my life, and I wanted to save some money. It tasted nasty, but hey–it was toothpaste. And even though Crest or Colgate has prettier boxes, I was sure the generic brand would be just as good. They usually are, right? Wrong. My checkup at the dentist revealed a major build up of plaque and a cavity, which was unusual for me. I asked my dentist if he thought it was because of my generic toothpaste, and he said it probably was. So I bought some Crest. And the next time, I got a clear report.

I knew that Crest toothpaste was probably better, but I didn’t want to spend the money on it. Well, I ended up spending ten times the cost of a tube of good toothpaste on a cavity caused by using the cheaper toothpaste. But in any case, I knew Crest was a good option because I had used it all my life as a child and never had a cavity; so I knew I could trust the brand. Maybe it’s a silly illustration because God is most certainly not a brand name, but the concept is there.

I know God. I’ve known God since I was seven years old, and I have learned through many difficult experiences that I can trust Him. I may not always like where I end up, but I can always trust that He’ll be there to help me. But people who don’t know Him already have a hard time believing He exists.

So don’t be surprised if someone who doesn’t know God doesn’t trust Him. It’s kind of like an untested brand at a store. Until they know Him personally, they’re going to have a hard time believing that He can actually do the things He promises to do.

So the first step is to introduce them.

And once they know Him, they’ll learn to trust Him. Because they’ll learn He never gives up on us and there’s nothing we can ever do to separate ourselves from Him.