What do you do with freedom? Sometimes I wonder if my generation really understands what freedom is. There’s a concept I’ve encountered among people my age and younger that freedom means you can do whatever you want to do. And maybe that’s true in some counts, but being free is more than that: being free is a responsibility. 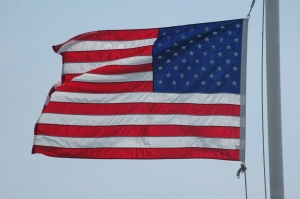 Well then, since God’s grace has set us free from the law, does that mean we can go on sinning? Of course not! Don’t you realize that you become to slave of whatever you choose to obey? You can be a slave to sin, which leads to death, or you can choose to obey God, which leads to righteous living.

Yesterday we celebrated America’s birthday. Some of us celebrated by setting off fireworks. Others of us (who live in a county so restricted we can’t even light a match) celebrated by getting together with friends. Why? Because freedom is worth celebrating.

America was founded with an awesome purpose, not just because the colonists wanted to do what they wanted to do. Maybe that had something to do with it. But the American Revolution wasn’t a study in chaos, not like the French Revolution was. The American colonists did everything they could to avoid war, but it was becoming necessary for them to declare themselves independent from England.

But freedom from England meant everything would change. America’s needs would no longer be England’s responsibility; they would be America’s. Declaring independence, being free, always means that you will take on more responsibility than you had before.

Jesus died to set us all free from the power of sin. If Jesus hadn’t come, we would have no hope of salvation. We’re all born into sin, and without Christ, we can’t escape it. Even with Christ, we still choose it sometimes. But Jesus made a way for us to live apart from sin. He offered us the option to choose Him rather than choosing sin, when before we didn’t have a choice.

Why not? We’re free, aren’t we? We aren’t subject to the Law. And this world isn’t our home anyway. Right?

If you’ve accepted Christ, if you’ve been freed from the power of sin and the power of the Law, you have an even greater responsibility.

If you give in to sin and live a life where you do whatever feels good, you will be a slave to that kind of life. You can be a believer and live this way because you’re free. You can choose this.

If you live a life according to the Law where you trust your own good works to justify you, you will be a slave to that kind of life. You can be a believer and live this way because you’re free to make your own choice.

But how are we supposed to live?

If you have accepted Christ, you have a choice. You have the freedom to live however you want to live, but whatever choice you make will have consequences. Choices always do.

Living free doesn’t just happen. It requires discipline. It requires sacrifice. It requires making difficult choices. It means sometimes you have to do the right thing especially when you don’t feel like it. This is true in both the Christian life and in your political beliefs, whatever those may be.

If you choose to follow Christ, beyond just simply believing in Him, those choices are up to you. God won’t force you to make decisions. Those are choices you will have to make along the way, and they won’t be easy. At least, not right away.

So we can sit back and let others do the work for us and reap the benefits of indolence. We can demand all the attention be put on us and on our hard work and live for glory and admiration. We can do nothing and detach ourselves from the world. Or we can do what Scripture says: love God and love people and wait for Christ to take us home.

The choice is up to you. Just remember that whatever you choose to follow will become your master. Whatever path you choose has consequences you have to face.