There’s a lot to be afraid of in life. I’m sure if you tried, you could make an exhaustive list of all the possibilities without too much effort. There is so much that we face on a daily basis that we could be afraid of if we choose. I’m sorry to say many times I choose fear when it comes to certain situations, especially like talking to people I don’t know. And maybe this is just me, but once I give in to fear, discouragement follows soon after–because I know better. I know that fear is a choice. I know that fear is not from God, but there are times when I choose it anyway.

The Bible amazes me because so often it has already made connections between emotions that we don’t think about. 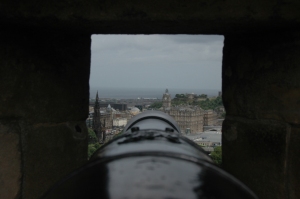 The view from behind a cannon in Edinburgh Castle, Scotland

Don’t be afraid, for I am with you. Don’t be discouraged, for I am your God. I will strengthen you and help you. I will hold you up with my victorious right hand.

Don’t be afraid because God is with you.

Don’t be discouraged because I am your God.

Are those sufficient reasons to turn from fear and discouragement? Obviously, God thinks so, or He wouldn’t have said it. These are His words via the prophet Isaiah to the people of Israel, offering comfort and help.

The fear part I get. We shouldn’t be afraid because God is with us. If God’s with us, who can be against us? If God is with us, nothing can harm us that He hasn’t allowed, and even if something does harm us, He’ll be there throughout. He won’t leave us. I can grasp that on a rational level, although the emotional level is a little more difficult. Once fear gets its claws in you, it’s hard to break loose of its hold.

Okay. So what about discouragement? Don’t be discouraged because God is our God. What? What sense does that make? Is that even an answer to the question?

I don’t know if you’ve noticed this, but God doesn’t always answer our questions in a way that we expect. Half the time, He’ll answer with a question. And the rest of the time He’ll answer the question we don’t even know we’re asking. He knows our hearts, and He knows what we need to hear, especially when we don’t know. But He’s always right. And He always says what we need. So what does this mean?

Why shouldn’t I be discouraged? I am your God.

Think about that statement for a moment. I am your God. What does that mean to you? To me, it means that I have access to a power greater than myself. It means that God has got everything figured out and He’s willing to let me in on it. It means that God has chosen me, not that I chose Him. I have, but He chose me first to be a part of His big plan.

I shouldn’t discouraged because God chose me in spite of my failures and inadequacies. My shortcomings are no surprise to Him. He knows all about them. I shouldn’t be trying to get through life on my own anyway. Remember? God is with me? That means He’s with me in the good times as well as the bad times.

When discouragement rears its ugly head, I need to remember that my life isn’t about me. It’s not about my failures or my successes. It’s about God and what God is doing and what He wants to do. I’m a part of His plan because He put me there–right where He wants me–and nothing is going to happen that He didn’t already know about. Nothing is going to catch Him off guard. And when I fail–and I will–I don’t need to give in to discouragement because He’s my God and He never leaves people behind.

Discouragement is as much a choice as fear is. True, I think it’s more of a response to giving into fear, but both of them are choices. And God has equipped us to face both down. So if you’re facing a tough situation today or if you’re just feeling blue, don’t give in. Don’t be afraid. Don’t be discouraged.

God is with you. He’s your God. He wants to help.

Choose to let Him.

How do you handle stress? Stress is something everyone will eventually experience, and that’s probably a good thing. There can be good stress. Good stress is the stress that urges you to do better, to improve yourself, to keep growing. And that kind of stress helps you become a better employee, a better friend, a better person.

But bad stress seems more prevalent in everyone’s lives, at least it screams the loudest. So you’d think we’d want to manage good stress and avoid bad stress in our lives, right? Well, ideally, that would work, but this is real life. And stress is everywhere. Yes, it’s a choice for us to let it control our lives, but most of the time it will come upon us before we even realize it has us.

You can’t avoid stress. But you can change the way you react to it.

Rocks on the path at Glen Eyrie – Colorado Springs, CO

But now, God’s Message,
the God who made you in the first place, Jacob,
the One who got you started, Israel:
“Don’t be afraid, I’ve redeemed you.
I’ve called your name. You’re mine.
When you’re in over your head, I’ll be there with you.
When you’re in rough waters, you will not go down.
When you’re between a rock and a hard place,
it won’t be a dead end—
Because I am God, your personal God,
The Holy of Israel, your Savior.
I paid a huge price for you:
all of Egypt, with rich Cush and Seba thrown in!
That’s how much you mean to me!
That’s how much I love you!
I’d sell off the whole world to get you back,
trade the creation just for you.

“So don’t be afraid: I’m with you.
I’ll round up all your scattered children,
pull them in from east and west.
I’ll send orders north and south:
‘Send them back.
Return my sons from distant lands,
my daughters from faraway places.
I want them back, every last one who bears my name,
every man, woman, and child
Whom I created for my glory,
yes, personally formed and made each one.’”

I don’t usually post only from the Message version, but this passage just has such wonderful ways of talking about difficult issues in life. Reading over it again, there isn’t any practical application for how to deal with stress, but there is a very important point:

Don’t be afraid, I’ve redeemed you.
I’ve called your name. You’re mine.

Do you get that? Sometimes I forget. It’s so easy for me to get overwhelmed with everything I have to do in my life, especially this time of year. And when I get overwhelmed with life, I forget who I belong to. God paid a price for me. In accepting the salvation He offers (to everyone), I have freely chosen to give my life to Him. So it doesn’t belong to me anymore.

I paid a huge price for you:
all of Egypt, with rich Cush and Seba thrown in!
That’s how much you mean to me!
That’s how much I love you!
I’d sell off the whole world to get you back,
trade the creation just for you.

For Him to say this? I’m not worth that much. Just think about what God paid to have a relationship with you. It’s amazing. And I struggle with buying birthday gifts for people I love? Look at what God has done. Look at what He gave just to be able to have a conversation with me.

So I suppose the question isn’t how you deal with stress. It’s can you remember how much God loves you? And can you remember what He’s promised to do for you when you’re struggling with life?

When you’re in over your head, I’ll be there with you.
When you’re in rough waters, you will not go down.
When you’re between a rock and a hard place,
it won’t be a dead end—
Because I am God, your personal God,
The Holy of Israel, your Savior.

Only God can make a promise like that. So if you’re in over your head today, remember you’re not alone. If you’re struggling to stay afloat in the circumstances life has thrown at you, remember that God won’t let you sink. And if you’ve finally reached the place where you can’t fall any farther, you still have somewhere to go. If you believe in Christ, God won’t ever give up on you, and He won’t ever let you go.

Maybe there’s a practical application to deal with stress, but the first step is remembering what God has promised you. The rest will fall into place. 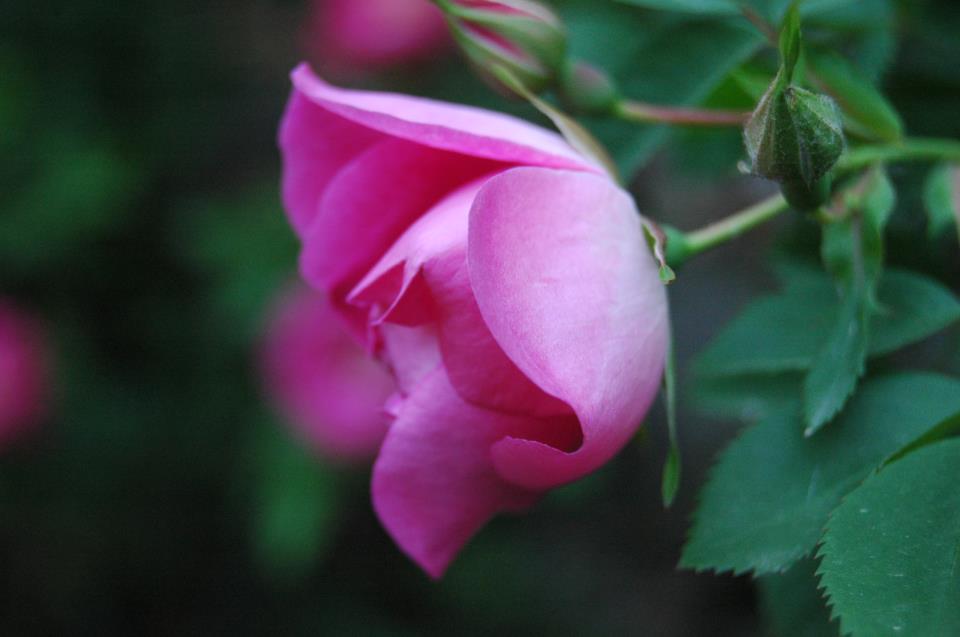 Life is busy. No. Scratch that. Life is insane. Maybe it’s just me, but I don’t think so. Everyone I know is busy. All of us are running around like crazy people with our hair on fire, scrambling to achieve something. We are looking for jobs or we’re trying to keep the ones we have. We’re trying to please people in authority over us or we’re trying to maintain the status quo.

So much to keep track of. I always feel like I’m forgetting something.

I fly to Indianapolis today for a crazy, banzai overnight, a work trip. And even though I’m sure I’ve got everything, I still feel like I’ve left something behind. Add that to the general feeling of insecurity and anxiety I already have because I have to go to a strange city and talk to people I don’t know, and I’m kind of a mess.

Give all your worries and cares to God, for he cares about you.

This is good for me to see today. It’s a good reminder. Because worrying is a choice. Well, at least, first, it’s a choice. Then, it becomes a habit.

Granted, there are steps to take to make sure we don’t forget something or that we aren’t irresponsible with what we’ve been given. And there are processes to follow to make sure that everything is done right. But after you’ve done your best, after you’ve followed all the steps, what good does worrying do?

I have to turn loose of it and let God take it from here. But that’s easier said than done, especially when you’re a control freak.

Worrying doesn’t really accomplish anything, though. I think it provides some sort of release, though, otherwise we wouldn’t do it. Maybe it’s some kind of comfort in illusion because by worrying over something we think we have more control over the outcome. We don’t. But it makes us feel like we do.

So my goal today is not to worry. What happens, happens. And I’m going to give my worries to God. And when I start to worry again, I’m going to choose to stop. It’s going to help me keep my perspective straight because if I can wrap my head around the fact that God is in control, maybe someday I’ll stop trying to take it back from Him.