Kansas isn’t a small state, but if you compare our population numbers to the rest of the U.S., we number among the lowest people per square mile (ranked 41 out of 50). While Wichita is the biggest city, it’s not uncommon to run into people you know on the streets regularly. Whenever that happens, how do we normally react? We exclaim: It’s a small world!

In some cases, it’s true.

The world gets smaller and smaller every day, especially when it comes to technology and communication. Ten years ago when my good friends Jim and Shelley Dinsmore moved to Guatemala as missionaries, it was a big deal to talk to them on the phone or video chat with them. But now, I stay updated with them continually on Facebook.

When my best friend moved to England, if we hadn’t been able to talk every morning, I might have gone a little nuts. But technology allowed us to stay in touch even though she lived 4,300 miles away.

So, yes, the world seems small, but is it actually shrinking? Of course, not. The only thing technology changes is our perspective.

Our perspective is the problem

You would think that being connected to every country, every person, and every source of information in the world would expand our thoughts. You’d assume that having a global mindset would encourage people to care more about those around them than before. But that’s not the case.

Our current generation is more selfish than it’s ever been, and it’s not just the younger generation that’s grown up with smartphones, virtual reality, and tablet computers. Our selfishness has nothing to do with technology, although I’m sure it hasn’t helped the situation. Human beings are naturally selfish. It’s part of our nature, and if we don’t check it, it’s a part of us that will take over our lives. (James 4:1-2)

Technology doesn’t make the world small. Our own self-interest does.

They all have bad days, just like you. They say things they later regret, just like you. And they need grace, just like you. But since we don’t see them as part of our individual world, we insult them or we complain about them or we discriminate against them. And instead of extending forgiveness, compassion, and understanding (Philippians 2:3-4) to those around us, instead we focus on ourselves and our own needs.

That’s not to say that we shouldn’t care for ourselves. We need to be good stewards of the life God has given us, but that doesn’t give us the right to ignore people around us who we can help. (Proverbs 28:27)

So stop living in yourself. The world is full of people who are hurting and lost and discouraged. You don’t have to save the world. Jesus already did that. But helping others is something He wants us to do. (Hebrews 13:16)

Don’t wait. Take the opportunity to help someone when you can. You won’t regret it, and God won’t forget.

Is it wrong to focus on other people? Well … like I blogged about yesterday, it’s not a good idea to compare yourself to others around you. That’s the fastest way to make yourself unhappy. But the older I get, the more I’m beginning to think that another cause of unhappiness in our culture is that we don’t focus on people around us.

There’s a big difference between comparing ourselves to others around us and focusing on them. 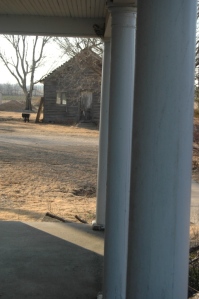 Don’t be selfish; don’t try to impress others. Be humble, thinking of others as better than yourselves. Don’t look out only for your own interests, but take an interest in others, too.

There’s a little book with a funny name nestled in the Old Testament. Its name is so funny most people mispronounce it. The book is Ecclesiastes, and I promise you that if you read it, you will spend most of the time cringing. It hits hard and makes you really think about what it means to be a Christian … which is really strange because it was written hundreds and hundreds of years before Christ was born. King Solomon, son of King David, wrote this little book under the inspiration of the Holy Spirit at a time in his life when he was searching for meaning. If you don’t know, King Solomon was the greatest, most wealthy king Israel ever had. But this is what he has to say about being happy in Ecclesiastes 2:9-11.

So I became greater than all who had lived in Jerusalem before me, and my wisdom never failed me. Anything I wanted, I would take. I denied myself no pleasure. I even found great pleasure in hard work, a reward for all my labors. But as I looked at everything I had worked so hard to accomplish, it was all so meaningless—like chasing the wind. There was nothing really worthwhile anywhere.

King Solomon, the wisest and richest man who ever lived, found that life was meaningless and empty when he lived for himself. Sound familiar at all, America? I think we are there. As Americans, we have everything we could ever want. Even if our taxes are a little high and we may not agree with every political ideal that comes out of Washington, we still have some semblance of freedom. We’ve never endured real persecution. And we have everything. As a good friend of mine says, even King Solomon couldn’t run down the road and buy a hot fudge sundae.

We have computers and technology and food and cars and music and entertainment and hobbies and the list goes on and on and on. We live in a culture that urges us to get what we want whenever we want it, and even if our economy is struggling, we still buy the things we think will make us happy–whether we can afford them or not.

But are we happy? If King Solomon wasn’t happy when he lived for himself, why would we be? So what’s the answer? What did Philippians say?

Don’t be selfish. Live for others.

So do something for someone else today, even if you don’t feel like it and especially if they don’t deserve it. Granted, you have to be wise, and you have to be responsible with the resources that God has given you. But that doesn’t mean we’re supposed to hide ourselves away and never interact with anyone.

Want to be happy? Want to be content? Focus on others, not to compare yourself to them but because you consider their success more important than your own. When you embrace that kind of humility, your life will be different. And so will your perspective.