When you run into an obstacle in your path, what happens? Everyone encounters obstacles, but some people give up and others press on. Why is that? Granted, there are a number of reasons, and many of those reasons depend on how many other obstacles you’ve encountered previously. But I truly believe one of the most important factors for those people who press forward are their friends. And they don’t even have to be close friends. Even an acquaintance can help someone make the decision to keep going when without them they might have given up.

As iron sharpens iron,
so a friend sharpens a friend.

I’ve always loved this verse. I love the symbolism of it. Iron sharpens iron. The thing about it that’s so cool is that if you try to sharpen iron with a metal that’s softer than it is, not only will you destroy the softer material, you’ll dull the iron too. Not saying you can’t have friends who aren’t the same kind of iron, because diversity in our friendships is important too. But a friend who doesn’t challenge you, a friend who doesn’t encourage you won’t help you much.

And I really think that’s what it comes down to most of the time–encouragement. What is encouragement? See many people hear encouragement and think it means you have to love. And that’s not untrue. A lot of encouragement is love. In fact, encouraging someone is pretty difficult if you don’t love them, but love is only a tiny part of what encouragement actually does. Some people hear encouragement and think that means they have to make allowances for people’s failures and accept people where they are with no question. And that’s also good. Part of real love is making allowances for people’s’ faults and meeting them where they are. But just because we’re supposed to love people that way doesn’t mean we need to help them stay there.

Encouragement is building others up. Think about the word itself. It means to give courage. And you don’t give someone courage by giving them a reason to sit on the bench.

Encouragement isn’t easy. No, it’s the farthest thing from easy. It’s so much easier just to pat someone on the back and let them roll around in their insecurities and their failures and their insufficiencies. It’s so much easier to just listen while they want to give up, to stand by while they make terrible decisions, to remain silent when they start down a path that will ultimately lead to trouble.

Do you have those kinds of friends in your life? Do your friends make you better? Or do they just love you from a distance? Maybe they don’t actively tear you down but they aren’t doing anything to build you up either.

If you’ve got those friends, thank God for them. They’re priceless. If you don’t, don’t give up till you find some. You’ll be better off with friends like that in your life. Maybe the people you know now are good at patting you on the back and congratulating you for mediocrity or even when you give up. But I wouldn’t call them friends. Friends accept each other, yes, but they also make each other better.

A knife can only cut something so many times before it gets dull. When I was growing up, we had sharp knives that we used to chop onion or celery, but they were so dull they did more smashing than cutting. I remember that my mom took them to be sharpened once, and when they came back we had to be very careful when we chopped with them.

What is interesting about knives is that you can’t expect to sharpen them using a material lesser than what they are made from. Anything less than the material they’re made from, and the knife will cut through. 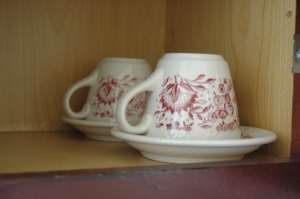 As iron sharpens iron, so a friend sharpens a friend.

I’m a pretty independent person, and I’m an introvert to boot. So I’m not one of those people who runs around looking for new friends all the time. I’m not against making new friends, but it’s not my first priority.

And although there are times when I love to be alone, I recognize fully that I need people around me at other times.

There’s another verse that I blogged on some time ago about how two people are better than one because when one falls down the other can help them up. And that’s very true. But what kind of people are you choosing for your friends?

That can make a major difference in how you live your life. Friends are a huge influence. The people you spend your time with will determine a lot about you and about the choices you will make.

Friendship is just like trying to keep a knife sharp. If you choose a friend who is at a different place in their walk with God than you are and you decide to make that friend the closest one in your arsenal, you’re going to struggle. I’m not trying to be snobbish here. This is just a fact.

But what happens when you put a steel knife with a steel knife? They sharpen each other. They turn out better than they were before you started sharpening them. That’s what happens with friends who are walking with God the same way you are. You can point out the places where you’re struggling. You can help each other understand (or at least deal with) the things God is doing in both your lives. You can encourage each other to keep going.

Iron sharpens iron. Steel can’t sharpen itself. It will just get duller and duller. And it will cut through anything of a less quality material, but if you match it against more steel, it will be stronger than it was before.

If you want to maintain a solid biblical walk, get yourself a solid biblical friendship and hold on to it. There will be times when it’s not fun, especially when you need to admit you’ve done something wrong, but more often than not, you’ll build a relationship with another believer that will last through your lifetime on earth.

There is nothing more awesome than staying out with a cup of coffee and a friend you know you can trust, encouraging each other and reminding each other that God is still working even if you can’t see it right now.