How do you handle bad news? There are a couple of different ways you can look at bad news, but when you get right down do it, bad news is bad news. It means sickness. It means difficulty. It means loss, sometimes of a relationship, sometimes of a life. Bad news comes in different forms, from people to messages to experiences. But no matter how it comes, it always comes. 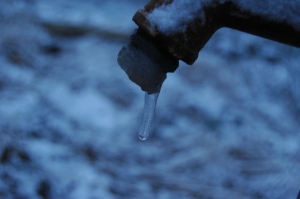 They do not fear bad news; they confidently trust the Lord to care for them.

Whenever I run across a verse like this that starts with an anonymous “they” I always want to find out who the verse is talking about. And doubly so in this instance because “they do not fear bad news” is a “they” I would like to know more about. Because if someone doesn’t have to be afraid of bad news, I would like to know what they are doing to be that way.

To find the answer to that question, you have to go to the beginning of the Psalm. Psalm 112:1 says, “How joyful are those who fear the Lord and delight in obeying his commands.” That is the “they” from verse 7. Actually the whole Psalm is talking about how the people who fear the Lord are benefited. What their lives are supposed to look like.

Do you know people who are driven by fear? They’re the people who always think the worst. The glass-is-half-empty types who can imagine the worst case scenario for even the best circumstances. Maybe you know someone who lives in a constant state of anxiety. Maybe that’s you. It’s not fun. Not at all. It controls your thoughts. It controls your actions. It keeps you pinned down in terror, projecting your worst nightmares come to life. And maybe you think you’re protecting the people you care about, but in reality you’re just driving them away. Fear is never a quality that makes someone a good friend.

And there is so much to fear in our world.

We live in a dangerous place. Even those of us “safe in the United States” can come up with myriad dangers that can control our lives. Car wrecks. Cancer. School shootings. Some people fear that they will lose their jobs, and in this economic climate it’s not unlikely. I know many people who have lost their jobs, especially most recently with Boeing pulling out of Wichita. Not old people. These are people with families and mortgages, not old enough to retire but probably not young enough to find another career path.

So how can you handle that kind of bad news without anxiety? How can this verse be true? Because at first glance it doesn’t make a lot of sense. You fear the Lord so you don’t have to fear bad news? Is that what it’s saying?

When I first read this, I thought what I usually think. This fearing the Lord isn’t the same as fearing bad news. In this context, fear of the Lord is more like reverence or worship, according to the Amplified Version. But what if it is the same concept? I don’t speak Hebrew, so obviously I don’t know. But what I do know is American culture. And Americans are good at revering bad news. Because it creates drama. It creates action. It shakes us up, and those who are not affected by the bad news get a show. Or they are entertained. As a culture, we worship bad news.

Even some believers worship bad news in a twisted way. They don’t like it when it comes, but they focus on it. Bad news arrives (because it always will in our broken world), and it stops us in our tracks. And we zone in on it and refuse to move on. And even though we hate it and even though we would give anything to make it go away, we stop and build an altar to it and make daily sacrifices to it. We worship our bad news.

You don’t have to.

When bad news inevitably comes, recognize it and keep moving. You don’t have to stop and build a monument to it. It’s okay to recognize it, but don’t stop your forward momentum. God has us all on a path and wants us to move forward. But so many of us get stuck in a rut mulling over our bad news day after day until we don’t even remember what God had planned for us to begin with.

Bad news can only stop you if you let it. The more you fear it–the more you worship it–the weaker you’ll be and the more time you’ll waste.

Fear God. Recognize that God is the one who can get you through your bad news. Focus on Him. Not on your circumstances. Not on your situation. No on your frustrations. Bad news will come. It always does. But don’t fear it and don’t let it throw you.

You don’t have to be afraid of bad news.