My property is very old. My house is old, my land is old, my trees are old–everything about my home is old. And in the south pasture, next to the foundation of an old granary is a rusted disc. I guess the technical terminology is disc harrow, according to Wikipedia. I’m sure years and years ago, it was used to cultivate soil for crops, removing weeds, tilling up the dirt and so on. But it isn’t used now. It’s old and rusted and just sitting in the back pasture.

Part of me feels like it was irresponsible to let the old thing rust away in the south pasture. But what was I going to use it for? I don’t have horses, and I may have five acres but anymore that’s not enough to raise any kind of profitable crop. So it sits out there abandoned. 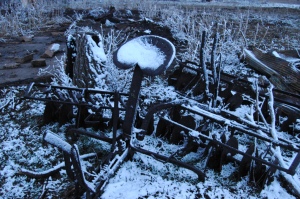 How kind the LORD is! How good he is! So merciful, this God of ours!

On first thought, this verse really has little to do with that old disc out in my back pasture. But the more I got to thinking about it, the more I realized that it has everything to do with it.

God is the only Person I’ve ever met who could take someone who was abandoned and deemed useless by society and culture and use them to make a difference in the world. God is the kindest, most merciful Person I’ve ever encountered.

If you haven’t already, I really suggest reading the entirety of Psalm 116. The writer is basically talking about how God reached down and saved him from danger.

He’s God. He is self-sustaining, eternal, and all-powerful. He knows all and sees all, and He can do everything. He doesn’t need us. He doesn’t need anyone. So when faced with the choice to reach down and help someone who can do absolutely nothing for Him in return, why would God do it? Why does God insist on helping us, especially when we can’t repay Him?

Mercy and kindness, to me, go hand in hand. Because mercy is giving someone something they don’t deserve. Mercy is being kind to someone who doesn’t deserve kindness.

Mercy is extending a hand of forgiveness to people who have hurt us. Mercy is accepting punishment for someone else when you’ve done nothing wrong. Mercy is offering to help someone who can offer you nothing in return simply because it’s the right thing to do.

And that’s what God does for us every day, whether you believe in Him or not.

Some days I feel very much like an old rusted tool that isn’t useful for anything anymore. I feel used up and worn out and run down, like I’m scraping the bottom of the barrel to find some grain of creativity when I’ve already given it all away. Some days I feel like I’ve lost whatever usefulness I had and that I’m not good for anything anymore. But on the days when I feel like that, I need to remember the old disc in my south pasture. And I need to remember Psalm 116.

God is merciful and kind. And no one is beyond His ability to save and restore. Even those facing death aren’t beyond His reach. He’s God. He can do anything, and He can use anyone, no matter who they are or where they came from.

And the irony is that we don’t even have to ask Him to use us. He does it anyway. But if we ask Him first and if we go along with it, we can experience a lot of joy.