Colorado has lots of beautiful lakes and streams and creeks, and many people who go out to camp bring boats and kayaks and rafts. We didn’t. If we’d had room, maybe. But I don’t go to the lakes to boat or kayak. I go to take photos. There’s an old family legend about a specific lake in Colorado, Taylor Reservoir–a photograph my dad took many moons ago. The world was so still that the Collegiate Mountains with all their trees and the sky and the moon were reflected perfectly in the waters. Dad snapped a photo of it on his old film camera, but in trying to get the image reproduced again, he lost both the negative and the only print of it (conspiracy theories, anyone?).

In any case, none of the lakes we visited in Colorado this time were still enough to take a breathtaking photograph of. The breezes were strong enough to toss the waters and obscure the reflection. It was still beautiful, but I would have loved to be able to see the mountains reflected perfectly. 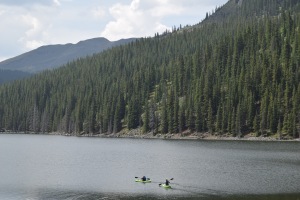 When God says to be still, immediately my brain jumps into defensive mode. Still? I can’t be still. I have too much work to do. So I brush it off and continue running around like a chicken with my head cut off, and before I know it, I’m more stressed and more frantic than I was before. And surprisingly I haven’t gotten as much done as I wanted because I can’t focus.

I make the mistake of confusing being still with being effective. Being still isn’t sitting around doing nothing. Being still is living at peace with God, trusting that God has it under control, and taking steps to take care of yourself in the mean time. That means taking a Sabbath. That means eating right and caring for the body God gave you. Being still is a lifestyle, and it has nothing to do with sitting around. It just isn’t being frantic all the time.

When you’re still, you can catch reflections. Like the waters in the lakes of Colorado reflect the image of the mountains and the sky, we can reflect the image of God to people around us. But if we’re running like busy crazy people all the time, God’s image is obscured. All people will see is our own craziness and not God’s power.

So don’t fall for the lie that being still means you won’t accomplish anything. Actually, being still and focusing on God will help you accomplish more than you would otherwise. And, what’s more, you’ll be able to portray a beautiful picture of God to the world around us. People will see Him in you. Isn’t that why we’re here anyway?

I’m busy. I’m beyond busy. I make a headless chicken look calm and organized. There are so many things going on in my life right now, and most of them are good. Some of them don’t meet the traditional definition of good, but I’m trusting that God will take care of that.

But I learned something at the writing workshop that I attended this year, and really it didn’t have much to do with writing.

This is part of the large passage I put up yesterday, but this verse is so good, I wanted to revisit it. The first line is familiar. It appears in many other places throughout scripture. I think one of the first places is in the Book of Exodus when Moses and the Israelites are trapped between Pharoah and the Red Sea. But it also appears here.

At the writing workshop this year, the presenters really focused their keynote sessions on resting and peace. They don’t tell us exactly what we’re going to be hearing when we sign up, so I wasn’t sure what to expect. And I ended up bawling through most sessions because peace is something I really need, but as a performance-driven perfectionist it’s something I usually deny myself.

So when this verse came up–and subsequent statements about living in God rather than working for Him–I started seeing this statement from a different perspective.

Be still. Know that He is God. And He will be exalted.

I run myself into the ground on a daily basis. Sometimes on an hourly basis. And while I don’t think I’m wrong to live that way, I shouldn’t do it all the time. I don’t take sabbaths. I don’t ever slow down.

Well, I shouldn’t say not ever because I’ve had to. Some health issues have finally forced me to take a breather–health issues related to the amount of stress I put myself under. And the irony of my stress is that usually it’s self-inflicted. I expect so much more of myself than anybody else does. I set impossible goals, and then I kill myself trying to exceed expectations.

No, it’s not wrong. Yes, we should always do our best. But God doesn’t say stress yourself out so I can be exalted. He says be still, know He’s God, and He’ll take care of it.

So how are you doing on that score? Being still is more difficult than it sounds. Knowing God is God? You wouldn’t think that’s hard, but it’s not easy either. Why? People don’t like standing still, and people don’t trust very easily. Not really. It’s not our default setting.  They’re both choices we have to make.

Be still. Know God. That’s all we have to do.

Are you stressed out today? Have you worn yourself out working for God? Have you driven yourself to the edge of your sanity trying to accomplish a goal you set so that God will be pleased with you?

Guess what? God doesn’t need you. And maybe He’s called you to do something, and that’s great. And it’s great that you want to do your best for Him. But He never calls you do something alone.

So stop stressing out. Be still. Know God. He’ll be exalted. And actually, He will be exalted more in your stillness than He would have been in your stress.