I’ve spent the last two weeks running around England and Scotland, in and out of the rain, on just about every form of transportation you can think of. But mostly trains. Trains are one of the top modes of transportation in this part of the world, whether they’re overground or underground, but one thing is certain. Regardless of what kind of train you’re traveling on, you have to have a ticket.

There was one point in our travels where my dad had the wrong card or something had gone wrong with his card in general, and he couldn’t get on the train. And it had to be sorted out before he could get through.

Aisle of the train from Manchester to Carlisle

But now God has shown us a way to be made right with him without keeping the requirements of the law, as was promised in the writings of Moses and the prophets long ago. We are made right with God by placing our faith in Jesus Christ. And this is true for everyone who believes, no matter who we are. For everyone has sinned; we all fall short of God’s glorious standard. Yet God freely and graciously declares that we are righteous. He did this through Christ Jesus when he freed us from the penalty for our sins.

Nobody is perfect. We all know that. So nobody can be good enough to get into heaven. But Jesus lived that impossible perfect life, and then He gave it up to pay the fee for us to have eternal life. All we have to do is say yes to Him.

That’s the good news the Bible talks about from beginning to end. There is hope, and that hope is found in Jesus Christ. In Jesus Christ alone.

So don’t get stuck on the wrong side of the tracks. You have everything you need at your fingertips to find out how to live a life with Jesus. Don’t let another day go by without taking the time to ask the important questions.

The only thing worse than missing the train is missing it while you actually had the right ticket all the time and just didn’t use it.

Yesterday was my first Monday physically back in the office since the UK trip. It was a very pleasant day. I got a lot done. And just as I was getting ready to leave and I was packing up my stuff, I realized that I didn’t have my wallet. I remembered I had left it sitting on the table at home. That morning, I’d driven to work without my driver’s license, and I was getting ready to drive home without it. So you can bet I was extra careful to observe all the traffic laws on the way home last night.

That’s just one example. I’m sure I’ve broken many other laws without really realizing it. I can’t name them because I don’t know them, obviously. But I know it happens. Like yesterday morning. I drove in to work without a license. That’s a big no-no, but I didn’t realize I didn’t have it until later in the day. And of course that can lead to all sorts of discussion about the differences between sins of omission and sins of commission and other sorts of churchy topics, but the bottom line is the fact that I broke the rules yesterday (once unknowingly on the way in and once on purpose on the way home).

Rule breakers are supposed to be punished. Law breakers are supposed to face justice. Granted, I was very thankful I didn’t get stopped, but if I had, I would have accepted a ticket or any fee they levied against me. After all, I broke the law by driving without a license. But as I was driving illegally yesterday, I couldn’t help but think that if this is true in our world that we can see, how much more true is it in the world that we can’t see? 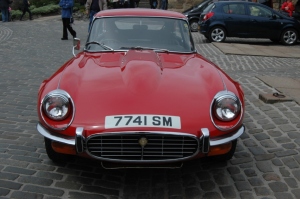 But now God has shown us a way to be made right with him without keeping the requirements of the law, as was promised in the writings of Moses and the prophets long ago. We are made right with God by placing our faith in Jesus Christ. And this is true for everyone who believes, no matter who we are. For everyone has sinned; we all fall short of God’s glorious standard. Yet God, with undeserved kindness, declares that we are righteous. He did this through Christ Jesus when he freed us from the penalty for our sins.

If you can’t keep the law, you aren’t worthy. That is the basic concept behind the law that God established with His people after He rescued them from Egypt. Maybe that sounds harsh, but there was a purpose for it.

When Christians talk about the Law, we usually think about the Ten Commandments. And, yes, those are a part of the law, and they are challenging. But God’s Law is bigger than the Ten Commandments. It’s like the whole book of Leviticus. I don’t even know how many rules there are, but there are too many to keep track of. But that didn’t keep people from trying because they lost sight of the purpose of the law. God wanted them to understand that no one can keep His law all the time.

That’s where grace comes in. That’s where faith comes in. By faith, we trust Christ, and God gives us grace, undeserved kindness and favor. That whole “being made right with God” part? That’s grace. And the awesome thing about God’s grace is that it’s big enough to cover all our sins, even the ones we don’t know we committed.

It’s not that the law doesn’t matter. Don’t misunderstand. The law is a part of Scripture, and every piece of Scripture is necessary, no matter how insignificant we think it might be. The law is essential. The law tells us who God is and what He expects, but if you’re a Christ-follower, you won’t be judged by the law. If you’re a Christ-follower, the law doesn’t apply to you. Grace does. Grace is a part of God’s New Covenant, the better Covenant through Christ, as Hebrews puts it.