Do you know a Christ-follower who has been hardened against God? Maybe you don’t think it’s possible to be a Christian and to have given up. Maybe it’s not. I can tell you that I haven’t been there, but I know people who have confessed Christ as their Savior who also decided at some point that following Him wasn’t worth it anymore. Does that make them not Christians anymore? No. If someone has trusted in Christ, they’re His; they can’t get away from Him, no matter how hard they try.

I know Christians who don’t want to be Christians anymore, or who at least don’t claim Christ anymore. But just because they have turned away from Him entirely doesn’t mean He’ll do the same. From what I’ve seen, He comes after those who have trusted in Him who decide to twist off on their own. And it takes a really hard heart to ignore God when He’s dead set on getting your attention.

Sin is so tricky. It doesn’t feel like sin at first. In the church, we always hear about “sin this” and “sin that” and you’d think sin would have a huge black sign on it that identifies it as something evil, something dangerous, something you need to stay away from. But the truth is that sin is easy. Most of the time, it’s easier than not sinning. And it’s fun, it satisfying (at least briefly), and it makes you feel like you’ve accomplished something. Or it makes you feel like you’ve gotten away with something. And, let’s just be honest, getting away with something you know is wrong has it’s own kind of allure.

But it doesn’t stop there. It’s like a malfunctioning GPS. You take one wrong turn and think that you can find your way back to your original path afterward, but it keeps leading you in the wrong direction. And before you know it, you’re so lost you don’t even know where the original path was. But then the other side of sin sneaks up and bites you. It tells you that you’re so far gone, so far off the path that even if you tried to get back to where you started, no one would let you. No one would give you a chance. No one would love you. And God must hate you, right?

Sin doesn’t just mislead us. It deceives us. After it’s directed us to follow our own path, it convinces us that it’s no use going back. 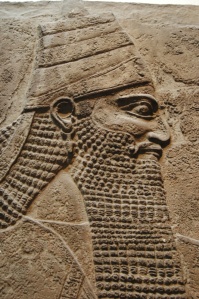 Stone carving of Tiglath-Pileser III from the ruins of Ninevah at the British Museum, London, England

Be careful then, dear brothers and sisters. Make sure that your own hearts are not evil and unbelieving, turning you away from the living God. You must warn each other every day, while it is still “today,” so that none of you will be deceived by sin and hardened against God. For if we are faithful to the end, trusting God just as firmly as when we first believed, we will share in all that belongs to Christ.

Here’s the deal, my friends. Everybody sins. Each one of us is going to screw up somehow, probably in the next hour. I know I can guarantee I will because I’m going to be around people today. I’ve discovered that I can reduce my likelihood of sin by about 50% if I don’t have to talk to people.

We have all turned against God. We’re all broken. We want to do things our own way, and we have to rely on God’s help so that we don’t. We have to rely on each other as fellow brothers and sisters in Christ to help us stay on the path. And for those who’ve wandered off the path, we need to be the beacons that help them find it again.

“Today” isn’t going to last forever. Sin is tricky and sneaky and everywhere, and if you’re using your own reasoning to get through life, you’re going to fall prey to it. Just accept it. It’s going to happen. If you use your own reasoning, you are going to sin. But if you live your life by the Bible, you won’t. And if you help each other using the Bible, you’ll save yourself and your friends a lot of heartache.

So if you’re a Christ-follower, know what the Bible says. Otherwise how are you going to know how to help another believer? Are you going to use your own reasoning? That won’t work. We’re here to help each other, support each other, point each other in the right direction, but if you’re just as lost as the person you’re trying to help, what good are you going to do? You’ll just have company while you’re wandering around.

And if you happen to be someone who used to follow Christ, remember that God never gives up on you. He never will. He’s still there, waiting for you to tell sin to shove it. And whether you believe it or not, there are probably still believers in your life or around it who haven’t given up on you either. So when you make the choice to come back, don’t hesitate. Come back. Some might not believe you, but I guarantee that the people who really love Christ will rejoice to see you coming, because it’s likely they’re in the road watching for you.