Does anyone else think our culture suffers from extreme ADD, just in general? Please don’t misunderstand. I’m not poking fun at ADD. It’s certainly a real condition and it has a huge effect on people who have it. But if you had to describe our American culture, I really think ADD would be high on the list of descriptors. We can’t focus on anything for more than a moment. The issues that should be a big deal are only around briefly, and even the issues that aren’t a big deal rise to popularity and then fade like the tail of a shooting star.

We’re all so busy, and I’m talking about myself here, though I’m pretty sure everyone feels the same way. We have so much going on that we have to focus on more than one thing or we’ll never get to the bottom of our to-do list. And pretty soon, we form the habit of focusing on several things at once, so when we get the chance to slow down, we’re used to being busy and we can’t function in silence anymore. 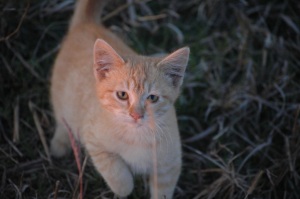 Guard your heart above all else,
for it determines the course of your life.

This past weekend I had some of my closest friends out to my house for a baking adventure. We had planned for more people to be able to come but sickness and general life issues sort of got in the way, which is fine because we’ll just reschedule. But two of the ladies who came out actually spent the night. I was so excited. And we had such an awesome time. There’s nothing like getting to spend a few uninterrupted days with people you can just be yourself with.

Well, when they pulled up and started unloading their car, it was around 7:00 p.m. Now that means it’s pitch black dark out here. I have a yard light, but it doesn’t do much to illuminate with any sort of detail. So my friends got all their stuff in the house, and we all tucked ourselves in for a fun evening of sister time.

The thought occurred to me (briefly) that when they were carrying stuff inside, they should have been tripping over cats. I have four cats now, which I’ve posted about on my writing blog like the crazy cat lady I’m trying not to be, and they are fierce when they want attention. But they were nowhere in sight that evening. But it was windy and cold, so I figured they had taken shelter in the barn or the culver or some other place they inhabit.

We chatted until all hours of the evening. We slept. We woke and had breakfast and baked and frosted cookies, and it was just marvelous….until they got their stuff together to go. They opened their car door and not one, not two, not even three–all four cats jumped out of the car. All four cats had spent the night in the vehicle, doing all the lovely things that barn cats do in their spare time. Needless to say, I was mortified.

It wasn’t as bad as it could have been. The mess was easily cleaned, but I was rather put out with my feline tenants.

And as I got to thinking about the devotional today, I couldn’t get away from this crazy story. How often do we take our attention off of something that matters to deal with something that isn’t so important? I do it a lot. There are many things in my life that I should focus on, but I’m too busy doing other things that I think are important, even though they really aren’t. It’s like taking your eyes off the cats when your car door is open. You’re just asking for them to jump inside and make a mess of things.

Maybe I’m overly sensitive to idiom because of my friendship with non-English speakers, but when I see a phrase like guard your heart, my first thought is: what does that actually mean? I checked my other translations (Amplified and Message) and both of them pretty much say the same thing. Guard your heart. Guard your heart. So to me, it means exactly what it says.

Be careful what you invest your life in. Pay attention to what you give your focus to. Don’t just jump into something because it feels right. Don’t just commit to an action because everyone else is doing it or because you’ll feel guilty if you don’t. Think. Consider the consequences. Don’t open your heart for the first person or cause you encounter, because they may lead you down a path that doesn’t matter. And before long you’ll be so invested in distractions that you won’t know how to think or feel anymore, and you’ll think that God has abandoned you.

Guard your heart. The course of your life depends on your investments, and if you’re so busy investing in distractions, you’re going to miss the trouble in your path. And it’s not that trouble will destroy you. Shoot, it may be easy to clean up. But either way you look at it, it’s a hassle, and it’s something you might have avoided if you would have just kept your eyes on what matters.